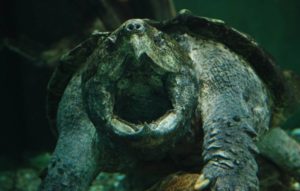 The Beast of Busco, unlike some of the other creatures discussed here at Strange Digest, appears to have been quite real. The story took place in Churubusco, Indiana, a small town located about 15 miles North of Fort Wayne, back in 1948 and 1949.

In July, 1948, two men, Charley Wilson and Ora Blue were fishing in a small lake located on the property of Gale Harris. Wilson reported seeing a giant turtle in the lake that he said was as large as a dinner table.

The problem was that Wilson enjoyed the fine art of storytelling and was quite good at it, so what people believed was just another tall tale from Mr. Wilson was quickly dismissed. The story would return the next year, March, 1949, when Gale Harris saw the Beast of Busco for himself.

Harris immediately went about capturing the beast, which was also known as “Oscar” after the original owner of the property. Harris built a trap using stakes and chicken wire and it appeared that Oscar had been caught, but the beast was far to strong and quickly escaped.

Harris seemed to become somewhat obsessed in his hunt for Oscar. He tried using dynamite to raise the Busco Beast to the surface but that effort failed. Harris then hired a diver to search the lake but an equipment failure ended that try. Harris then came up with his master plan, drain the entire lake leaving Oscar nowhere to go.

Harris rigged up a sump pump powered by his tractor and began to empty the lake. The effort to capture Oscar did not go unnoticed as neighbors began to gather. On October 13th, as the lake continued to drain Oscar made a brief appearance, snatching a duck from the surface of the lake.

One of the people in the crowd that saw Oscar was not a neighbor, he was a reporter for United Press International, the story of Oscar, the Beast of Busco went National. For Mr. Harris however, things were about to go bad.

The lake was nearly empty and there was no sign of Oscar. Harris thought that perhaps Oscar had buried himself in the lakes mud bottom to hibernate. Then the sump pump broke and Harris had to be taken to the hospital suffering from an appendicitis.

While he gone the rain moved in, lots and lots of rain. The lake quickly began to fill and any chance to capture Oscar was lost.

The giant Snapping Turtle Oscar was never seen again. If the reports of his size were anywhere near accurate The Beast of Busco was the largest ever, by far. Oscar was estimated to weigh about 500 pounds.

The largest Alligator Snapping Turtle on record is just over 230 pounds, with an unconfirmed report from 1937 of one weighing in at 403 pounds. For Oscar to have grown to such a massive size he would have been very old when he was first seen, and most likely died at the bottom of the lake after a brief moment in the spotlight.