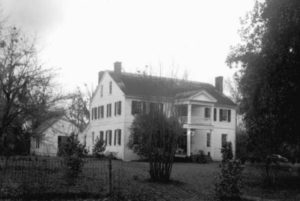 The Palmer House located in the tiny town of Monticello, Florida, was built in the early 1800′s by Dr. Thomas Martin Palmer, who served as the Surgeon General for the Confederacy during the Civil War.

It was Dr Palmer’s son however, Dr. Dabney Palmer, that is believed to responsible for the reported paranormal activity at Palmer House. Dabney inherited the home from his father and if the story’s are true, he has never left.

Dr. Dabney Palmer had the public image of a respected small town doctor but he had a hidden dark side. He served not only as Monticello’s doctor, but also the pharmacist and undertaker. With his office located on the same property as Palmer House, he could often be seen moving from place to place, treating patients at his office and embalming the dead in the homes second story, which served as a morgue. One of Dr Palmer’s strange beliefs involved the blood of the dead.

For whatever reason, Dr. Palmer thought the blood that he removed from a corpse during the embalming process should be buried with the body. To that end Palmer employed an assistant, a black man with the nickname “Poltergeist,” a name given the man because he was said to cast no shadow.

When Dr. Palmer prepared the body of the deceased, Poltergeist was sent to dig the grave. Along with a shovel, Poltergeist carried a bucket containing the blood of the recently departed, which he dumped into the freshly dug grave.

One of the best known stories of paranormal oddities at Palmer House involves a blood stained wall that could not be cleaned away. The stain was created when an argument broke out between Dr Palmer and poltergeist over Palmers strange burial practices.

As the argument escalated, Poltergeist threw one of the buckets of blood at Dr. Palmer, the blood splattered everywhere including on a wall. Despite all efforts to clean the stain, it remained.

Layer after layer of paint were applied but the stain could not be hidden. Then one of the owners of the home who planned to use Palmer house as an antique store, chose to replace the wall to finally rid the house of the ghostly stain.

It seemed to work, the stain did not reappear on the new wall. Then one day as the antique store owner removed a picture from a wall directly below where the stained wall had been, there it was, the stain had reappeared.

Paranormal activity reported over the years include cool spots, the sound of footsteps descending the staircase, as well as the disembodied voice of an unknown woman in the building that served as Dr. Palmers office. There is also the ghost of a man seen by several witnesses.

The description of the manifestation is that of a man dressed in clothing of the 1800′s sometimes wearing a top hat. He is said to be carrying an old-fashioned medical bag and moving back and forth between the office and house. It is believed to be the ghost of Dr. Palmer himself.