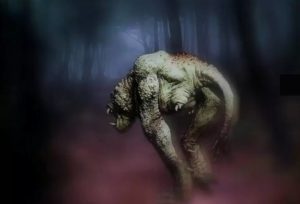 “It Had Three Legs!” were the words a man named Henry McDaniel used to describe his first encounter with something his children simply called, a monster.

McDaniel used the words while speaking with the Illinois State Police who had responded to his call for help. Mr. McDaniel would see the three-legged creature again and he was not alone. The creature, would become known as The Enfield Horror.

The story of the Enfield Horror began on the evening of April 25th, 1973, in the small Southern Illinois town of Enfield, a young boy named Greg Garrett was playing in his backyard. His pursuit of fireflies however, would soon be interrupted by a monstrosity called The Enfield Horror.

As the young Garrett’s parents watched TV, their son burst through the back door of the home, crying and hysterical. He told a very strange tale about a bizarre creature that was simply unbelievable.

He said he saw a monster, about 4 or 5 feet tall, short little arms with claws, gray slimy skin and 3 legs, also with claws, and big red eyes. Garrett’s shoes were torn, he said it happened when the monster ran past him and stepped on his feet. The boy parents were very concerned, their son was not known to make things up or lie, but they just couldn’t believe his strange story.

It was just a short time later, the Garrett’s neighbor Henry McDaniel and his wife, returned home at about 9:30 pm. They found two of their children, Henry Jr. and Lil in a panic. They told their parents that some kind of weird creature was scraping at the house, trying to get in.

The Sr. McDaniel listened in disbelief, then he heard something, a scratching sound outside. McDaniel grabbed his pistol and opened the front door, and he came face to face with the Enfield Horror.

His description of the monster was identical to that of Greg Garrett. McDaniel opened fire on the creature, but while McDaniel was sure he hit the Horror, the bullets did not seem to harm it. He said it “hissed like a wildcat” and jumped away, covering approximately 75 feet in 3 hops, disappearing by some nearby rail road tracks.

McDaniel called local police but Illinois State Troopers in the area responded to the call. The troopers investigated the area but found no sign of the Enfield Horror. They did however find scratch marks on the outside of the home which appeared to be fresh, and most interestingly, footprints, three of them, with prominent claws.

Two of footprints were about 4 inches wide and the third slightly smaller. The troopers had no explanation or even a guess as to what may have left such tracks.

In the days following his encounter with the Enfield Horror, McDaniel apparently not fearing ridicule, told his story to everyone he saw. Before long self-appointed “Monster Hunters” began to arrive in Enfield.

At one point White County Sheriff Roy Poshard Jr. threatened to arrest McDaniel if he didn’t keep quiet about his encounter with the Enfield Horror, but it was already to late. Five of the so-called Monster Hunters were arrested and charged with being a threat to public safety, after they opened fire on ” A hairy gray thing”.

Rainbow was not able to get a clear view of the Horror because it was in shadows and had its back towards him. Rainbow reportedly recorded the ungodly scream of the Enfield Horror, but that recording can not be found.

The stay of The Enfield Horror was a short one. Henry McDaniel however would see the Horror one last time. McDaniel woke late at night on May 6th, the neighborhood dogs were barking. McDaniel got up and looked outside.