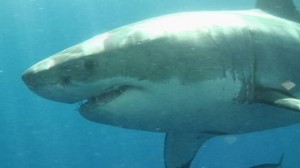 A sharp, coppery emptiness rumbled deep within the creature’s gut. Two full moons had come and gone since it had last fed, and its need was now overriding. Desperate. Before it, an invisible cone of fear swept the warm, shallow sea clean of life.

Shoals of hake and tilefish panicked at its coming, scattering like handfuls of flung metallic spears. At a length of 50 feet (15 metres) and a mass of over 52 tons (47 tonnes), it would take more than a mere morsel to satisfy the megalodon. The enormous shark needed food – big food. A marlin circled lazily to the Megalodon’s left, its barred ultramarine flanks glittering in the flickering shafts of late afternoon sunlight. Capable of mind-stuttering bursts of speed, it was too hard to catch for the shark tobother with.

But still Megalodon’s hunger burned. Skulking silently along the bottom, the megalodon caught a glimpse of a whale rising gently to the surface to ventilate its lungs. It was a cetothere, slow-moving and about 30 feet (10 metres) long: perfect. But the whale would only be vulnerable for a few moments, as it recovered from its most recent dive. As the whale drew in fresh air to replenish its spent supply, megalodon continued its stalk. Closer, closer, NOW! The shark pumped its tail powerfully from side-to-side, accelerating rapidly to close the distance between it and the fuel its cells so urgently needed.

The Megalodon’s jaws gaped wide, revealing triangular, serrated teeth the size of a man’s hand. Oxygen-bearing water pounded through its gills exhilaratingly. The Megalodon’s upper jaw, slung loosely under its skull like that of other sharks, protruded forward and down: reaching, straining in anticipation of sweet, warm flesh.

Megalodon is by far the most celebrated and contentious of extinct sharks. Best known for its spectacular fossil teeth, broadly triangular and up to 7 inches (18 centimetres) long, Megalodon is the stuff of which legends are made. Virtually everyone who has ever gazed upon even a moderate-sized Megalodon tooth has found it impossible to resist imagining what the rest of the fish might have looked like. And paleontologists have found it difficult to resist constructing theories about how this enormous shark may be related to the modern Great White.

The fossil teeth of Megalodon are very similar in over-all form to those of the living White Shark. Many people – professional paleontologists and amateur fossil collectors alike – have long assumed this similarity indicates a close evolutionary relationship between these two species. But the teeth of Megalodon show some notable differences from those of the White Shark: they are much thicker, resembling a broad ‘D’ in cross-section; the serrations are much smaller and more regular; and there is a dark, chevron-shaped region,called a “bourlette”, between the rough root and the smooth blade (such a bourlette does not occur in the teeth of Carcharodon carcharias). 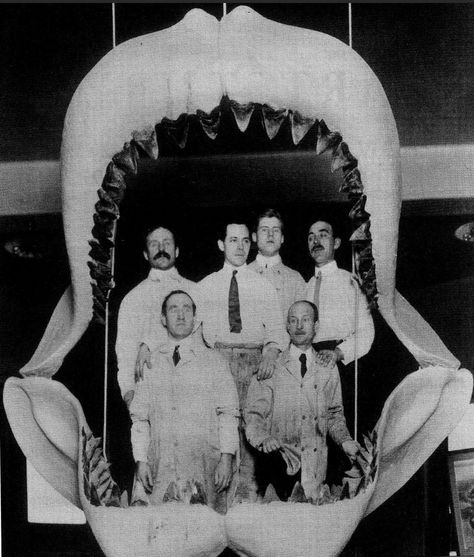 Paleontologist Michael D. Gottfried and his co-workers have argued that these differences (with the exception of the bourlette) become less pronounced when Megalodon teeth are compared with the very largest white shark teeth. Gottfried suggests that by extrapolating tooth changes known to occur in the modern white shark, very megalodon-like teeth would result. Critics remain unconvinced.

– In the year 1918 first recorded the sensation that had been caused among the “outside” crayfish men at Port Stephens, when, for several days, they refused to go to sea to their regular fishing grounds in the vicinity of Broughton Island. The men had been at work on the fishing grounds—which lie in deep water—when an immense shark of almost unbelievable proportions put in an appearance, lifting pot after pot containing many crayfishes, and taking, as the men said, “pots, mooring lines and all”.

These crayfish pots, it should be mentioned, were about 3 feet 6 inches [1.06 m] in diameter and frequently contained from two to three dozen good-sized crayfish each weighing several pounds. The men were all unanimous that this shark was something the like of which they had never dreamed of. In company with the local Fisheries Inspector I questioned many of the men very closely and they all agreed as to the gigantic stature of the beast. But the lengths they gave were, on the whole, absurd. I mention them, however, as a indication of the state of mind which this unusual giant had thrown them into.

And bear in mind that these were men who were used to the sea and all sorts of weather, and all sorts of sharks as well. One of the crew said the shark was “three hundred feet [90 m] long at least”! Others said it was as long as the wharf on which we stood – about 115 feet [35 m]! They affirmed that the water “boiled” over a large space when the fish swam past. They were all familiar with whales, which they had often seen passing at sea, but this was a vast shark. They had seen its terrible head which was “at least as long as the roof on the wharf shed at Nelson’s Bay.” Impossible, of course! But these were prosaic and rather stolid men, not given to ‘fish stories’ nor even to talking about their catches.

Further, they knew that the person they were talking to (myself) had heard all the fish stories years before! One of the things that impressed me was that they all agreed as to the ghostly whitish color of the vast fish. The local Fisheries Inspector of the time, Mr Paton, agreed with me that it must have been something really gigantic to put these experienced men into such a state of fear and panic.

– Second sighting took place in 1933, again off the coast of Rangiroa. Aboard the S.S. Manganui, Grey and his son Loren were returning to San Francisco after a fishing trip to Tahiti. One evening at about 5:00 p.m., Loren was at the rail when he saw a small flock of spiralling sea gulls and, near by, an area of yellow water:

At first I thought it was a whale, but when the great brown tail rose in the ship’s wake as the fish moved ponderously away from the liner, I knew immediately that it was a monstrous shark. The huge round head appeared to be at least 10 to 12 feet across if not more … It was my belief that this huge, yellowish, barnacled creature must have been at least 40 or 50 feet long. He was not a whale shark: the whale shark has a distinctive white purplish green appearance with large brown spots and much narrower head. So what was he—perhaps a true prehistoric monster of the deep?

What we had seen was something [that] no ichthyologist had ever dreamed existed. The largest known specimen of this type of shark, generally known as a sand shark or black-tipped shark, had hardly been known to exceed a length of about 15 feet.

Despite Loren Grey’s assertions that what he saw was not a whale shark (mirroring his father’s reaction to his own sighting), it is most likely that that is exactly what is was. Grey’s description of a whale shark is completely erroneous: whale sharks are a dark grey, greenish grey or reddish colour above, with many white or yellowish spots and transverse stripes, and are yellowish or white on the underside (Castro 1983). As mentioned previously, they also have a very wide, squarish, yet slightly rounded head. All of these traits fit well with Grey’s description.

– Last eyewitness accounts interpreted as being of C. megalodon are put forward by Cartmell (1978). His first piece of evidence is sonar trackings by “one of the new breed of underwater exploratory vehicles” of an unidentifiable object about 100 ft (30 m) long that was travelling faster than any submarine. The absurdity of this account—which supposedly serves as evidence for C. megalodon survival—will not be commented upon. Cartmell also mentions another eyewitness account of a giant shark:

In the 1960’s along the outer edge of Australia’s Great Barrier Reef, an 85 foot [26 m] ship experienced engine trouble which forced it to weigh anchor for repairs. Although the men subsequently refused to openly report what they had seen for fear of public ridicule, the captain and his crew later told friends of sighting an immense shark as it moved slowly past their ship. Whitish in color, they were awed by its size. It was as long if not longer than their boat! Experienced men of the sea, they too were certain the creature was not a whale.

Cartmell provides no references for his claims, so without verifiable sources, the above stories (the latter of which drips with tabloid style and reads much like a rewritten account of the 1918 giant shark) are useless as evidence.