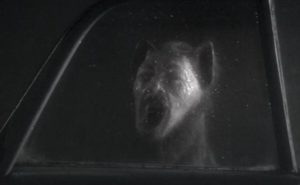 In 1887 lumberjacks working in Wexford County, Michigan had an encounter with the Dogman. They saw what they thought was a large wolf and decided to pursue the creature.

They quickly changed their minds however when the Dogman stood up on its hind legs. In Paris, Michigan a 17-year-old man named Robert Fortney was reportedly attacked by a pack of wild dogs in 1938.

Fortney, who was hunting at the time, fired at the dogs to scare them off. Four of the five dogs fled, but one remained and it reared up on it back legs and stared directly at the 17-year-old.

In 1987 the Michigan Dogman legend became popularized by radio disk jockey Steve Cook of WTCM in Traverse City, when he played a song called “The Legend”. Cook had recorded the song as a April Fools Day prank, but the radio station soon began to receive phone calls from people saying they had encounters with the Michigan Dogman.

Cook has reportedly earned more than $60,000 from the Michigan Dogman song, all of which he has donated to various animal charities.

The Dogman sightings often occur near Native American mounds and other sacred sites. It may be that the Dogman is some kind of “Thought Form”, created hundreds of years ago that continues to survive to this day.

If this is the case, the Michigan Dogman must, at least at times, be able to take on a solid physical form, as reports of torn clothing and scratches have often been included in stories of Dogman encounters.

Also, Godfrey herself has made many plaster casts of the Michigan Dogman paw prints, some of which measure 6 inches long and 6 inches wide, far to large for a wolf.

The Story Of Albert Ostman, Who Was Abducted By Bigfoot In 1924