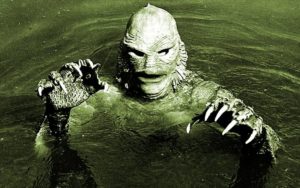 Did an unknown creature which is now known as the Green Clawed Beast really attack a woman swimming in the Ohio River back in August of 1955? There was never a report of such a creature in the Ohio River before or since the one time encounter. Much of the Green Clawed Beast story details appear to have developed over the years since the reported encounter occurred, as the story was retold by the children who witnessed it from the river bank.

It was a hot Summer afternoon near Evansville, Indiana, on August 21, 1955, when Naomi Johnson and her best friend Louise Lamble, along with Naomi’s children Darrell, Darwin and Sandra went to the Ohio River for a cooling swim.

While the children remained on the river bank Naomi, a strong swimmer, swam out into the river, her friend Louise also entered the water with an inner tube. At some point while just 15 yards off shore, Louise was pulled under water but soon surfaced gasping for air. She said something was pulling her under just before disappearing under the surface again, after several attempts she managed to free herself.

Once back on the river bank Naomi’s wounds from the attack were obvious. Her leg was scratched from her knee to ankle and was covered with a bluish colored mud. When medical help was summoned they tried to clean Naomi’s leg, they could not remove a bluish stain on her leg which reportedly took several days to fade.

While no one got a good look at what attacked Naomi Johnson she reported that the creature had a green scaled body and hairy three clawed hands. Johnson later claimed that she was visited by a U.S. Air Force officer who warned her not to speak of what had happened. In fact, she said that what attacked her looked like “one of those little green men.”

While many strange creatures and events have been reported along the Ohio river, the case of the Green Clawed Beast seems to be a case of a misinterpretation of a real event that was then exaggerated by years of retelling. The Ohio River has deadly undertow and may have been responsible for pulling Naomi Johnson underwater.

The river bottom is littered with cast off fishing line and other debris as well as trash from the busy shipping traffic that moves along the river. As for the blue stain that could not be cleaned from Johnson’s leg, it was tested and shown to be mud from deep caves beneath the river and probably stirred up by the boat traffic or other, very natural underwater movement.

The Story Of Albert Ostman, Who Was Abducted By Bigfoot In 1924