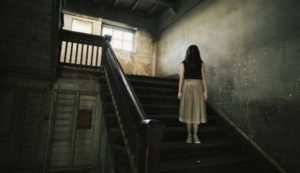 This urban legend is a story about a 17 year old student in Indiana called Carmen Winstead, who was killed when she was pushed into an open sewer by five girls at her school who she thought were her friends. At the time, the school was having a fire drill. Carmen was new to the area, her father had recently lost his job and had to move states in order to find new employment, and the relocation midterm had been hard on Carmen, who had to leave her friends behind and attend a new school in Indiana.

Carmen had a hard time making new friends at the school as no-one was particularly interested in befriending the new girl and initially she would spend the majority of her time alone walking from class to class and spending her breaks alone speaking to no-one. Eventually, however, she started hanging around with a group of 5 other girls, who she considered to be her friends, however, she soon discovered they had been talking about her behind her back and spreading vile rumors about her around the school.

When she confronted them about it, they took to bullying her every day making her life a complete hell. One day, after the bullying had become to much for her, she had decided to stay behind after school and tell the head teacher what had been going on, however she died before being able to do so. After lunchtime, the school announced that they would be having a fire drill, and when the alarm bell went off, all the students made their way out into the yard where roll call could be taken.

The 5 girls saw Carmen standing near an open sewer and decided to embarrass her in front of the other students, crowding round her, calling her names and pushing her around, until she tripped and fell down into the sewer. The 5 girls thought this highly amusing and were giggling when the teacher called out Carmen’s name, and replied that she was down in the sewer. The teachers looked down the manhole and could see Carmen’s body lying at the bottom among all the sludge and called the police. Before long her body was recovered. Her neck had broken when her head hit the ladder, and her face was badly damaged when she finally hit the concrete at the bottom.

The students were all questioned, but as no-one except for the girls who pushed her had seen anything, all guilty parties managed to lie their way out of it. They all told the same story, that she had lost her balance and had fallen in, and the death was ruled an accident.

Several months later many students at the school started receiving emails and messages on their myspace accounts titled ‘They Pushed Her’, which told the truth of what had really happened that day. Carmen had not accidentally fallen into the sewer, but had been pushed. The emails did not disclose the identities of the guilty parties involved, but rather threatened that there would be horrible consequences should they not confess.

Many thought this was a horrible prank to be played on those with the memory of the tragedy still fresh in peoples minds, but the 5 girls involved in Carmen’s school were by now extremely worried that someone knew what had happened and was threatening them. A few days later one of the girls involved in Carmen’s death is at home taking a shower when she began hearing a strange crackling sound that appeared to be coming from the drain, and quickly exited the bathroom in fear.

Carmen is apparently still not satisfied, according to the legend she has become a twisted entity whose sole purpose is to have the truth of her death known. Not content with the deaths of the guilty parties, she will visit anyone who does not believe the story and forward it on to others, whether it be by a drain, toilet or shower, she will come and get you in the night as you sleep, and you will wake up in the sewer hearing her cackling before you meet the fate of the others she has killed down there.