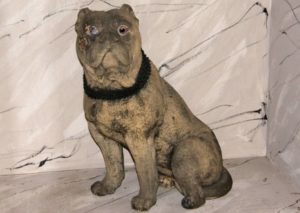 The story of John Heinl and his constant companion Stiffy Green is based on real events.

The story may sound familiar as many reports have been featured in news reports around the world which tell of similar events. What makes the Stiffy Green legend different is the paranormal events which are said to have occurred.

John Heinl and his small bulldog could often be seen walking the streets of Terre Haute, Indiana. Stiffy Green got his name because of his stiff stride and his emerald-green eyes. The two seemed to be inseparable and then it all ended.

Mr. Heinl died in 1920, leaving his best friend alone. Heinl’s final resting place was a mausoleum at the Highland Lawn Cemetery. Stiffy Green was taken in by friends of Mr. Heinl, but Stiffy had other ideas.

Before long Stiffy Green was gone and his new caretakers went searching. They would find Stiffy at the mausoleum of his master and he refused to leave. People brought food to the cemetery for Stiffy but he refused to eat as he stood guard over his fallen master.

One day a Highland Lawn employee found Stiffy Green dead at the door of John Heinl’s mausoleum. Stiffy Green’s story was well-known and it was decided that Stiffy’s body would be taken to a local taxidermist and be preserved.

Stiffy was positioned in a sitting pose and when the taxidermist was finished, Stiffy Green was placed at the spot he had been found dead so he could continue to guard his master.

Stiffy had to be removed from the site after vandals repeatedly struck the tomb, the preserved Stiffy is now in the possession of a local museum.

The story of the dedicated bulldog however does not end there. Cemetery workers who knew Stiffy Green claimed that they often heard the distinctive bark of Stiffy.

There are also reports of sightings of not only Stiffy Green, but his master John Heinl as well. The old friends appear to have reunited and are said to roam the Highland Lawn Cemetery.