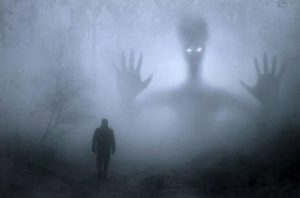 In 1822, a hurricane slammed into Charleston, South Carolina, more than 300 people died in the storm. The days shortly before the hurricane struck also marked the first appearance by a phantom being known as the Gray Man of Pawleys Island.

It would seem that as tragic as the storm’s devastation to property and life was, it could have been worse had it not been for the warnings delivered by the Gray Man.

While on the beach they saw a rather strange-looking man dressed all in gray. The man never spoke to the family but they got a strong feeling that something was going to happen and they needed to get off the Island.

They did leave and the warning from the Gray Man may well have saved their lives. The storm that hit Pawleys Island is now called the Sea Islands hurricane and killed 15,000 people.

As is the case with many of those who heed the warnings of the Gray Man, when the Lachicotte’s returned to the island they found their home to be undamaged, one of the few remaining standing buildings.

In 1954, Bill Collins and his new wife were honeymooning on Pawleys Island when someone began pounding on their door. It was about 5:00 am and when Bill opened the door he found himself face to face with the Gray Man.

The Gray Man told the couple that he had been sent from the Red Cross to warn them of an approaching hurricane and that they would have to evacuate.

There was no prediction of a hurricane making landfall on Pawleys Island at the time and the couple saw no sign of anyone else leaving the area. The Gray Man however made a strong impression on the Collins and they headed inland.

The Gray Man has been seen before all the major hurricanes that have hit Pawleys Island for at least 200 years. In 1989, Clara and Jack Moore were walking on the beach when they saw a man in the distance walking towards them.

As the man dressed in gray got closer Jack raised his hand to wave to the stranger when he vanished. The Moore’s were familiar with the stories of the Gray Man and what his appearance meant. They left the island and hurricane Hugo soon pounded the island, 76 people died.

The origin of the Gray Man is not known for sure but there is a legend which may be based in fact and explain the Gray Man. The legend tells the story of a young man who travels to visit his parents at some distant location leaving his fiancée behind.

The man is gone for several months but then begins his long journey home. Wanting to be reunited with his wife to be as soon as possible, the man took a short cut through unexplored terrain. A very bad decision as the man and his horse are said to have encountered quicksand and both were killed.

When the man’s fiancée learned of his death she went into a deep depression and began to walk the beach for hours at a time. Then one day as a stranger approached her on the beach she recognised that the man was not a stranger at all, it was the ghost of her recently departed fiancée, appearing to be dressed in all gray.

The ghostly apparition warned her that she must leave Pawleys Island as a violent storm was approaching. The woman and her family took the warning seriously and left. As predicted by the Gray Man, a storm did strike and despite the devastation left in its wake, the home of the Gray Man’s fiancée was untouched.