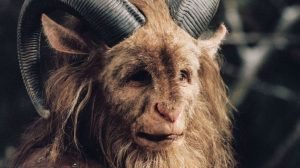 The Legend of Pope Lick Monster is an Urban Legend that goes back to at least the 1940’s.

Although the legend of Pope Lick Monster is only a legend, it’s a Legend That Keeps On Killing.

The Legend of a monster at Pope Lick, Kentucky, is one of several so-called Goat men that have been reported across the United States.

The creature is, as one would imagine, said to be a beast with hair covered legs, like that of a goat, the torso of a man and a human-like head with white skin and sharp horns like a goat.

The Pope Lick Monster is believed to live under the Norfolk Southern Railway trestle, which spans Pope Lick Creek, just outside of Louisville, Kentucky. The trestle was built in the late 1800’s and rises about 90 feet above Pope Lick Creek.

The Pope Lick Monster kills its victims, not by a physical attack, but by causing them to fall from the towering train trestle.

Some say the goat-man lures its victims to their deaths using some sort of hypnosis or telepathy, while others claim that the Goat man mimics the voices of the victims loved ones.

Once the victim is out on the trestle they either fall to their deaths or are forced to jump because of an oncoming train.

Connected to the legend of the Pope Lick Monster is the Ghost Train. The Ghost Train has never been seen, but at times the train trestle is said to shake and vibrate as if a train were passing.

When the Ghost Train crosses the trestle, the Pope Lick Monster is believed to be nearby.

Of course none of this is true, The Pope Lick Monster is just a legend. That fact however, does not stop the monster from taking victims.

What is the Cryptid Orang Pendek?