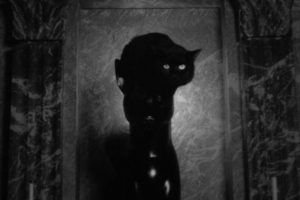 It seems the appropriate time for recollecting the political ghosts of our beloved nation. We already know the presence of Abraham Lincoln in the White House.

Lincoln along with Andrew Jackson and host of first ladies continue to haunt the US President’s home. People in Blair House have seen Woodrow Wilson sitting in a rocking chair. Even reports have come from other Federal Government Buildings of Washington about the presence of past leaders in the premises.

However, one ghosts, who’s known to be seen in 2 sites, has always been heralding disasters for the nation. It’s Phantom black cat.

Phantom Black Cat or Demon Cat (DC as it is briefed by people who see it) has been seen in basements of White House, The Capitol and The Mall and the Capitol. It’s a myth that whenever DC is reported to have appeared, national disaster has taken place.

When it has been seen, it sometimes appears like a kitten, but the moment the person (who saw it in the first place) started getting nearer, it grew into menacing & angry tiger-like species that had scary red-glowing eyes.

DC is only seen during the night hours and normally people, who are alone at that time, come across it. It first made an appearance prior to the 1929’s devastating crash in stock market. Next, it was seen just before John F. Kennedy was assassinated. In White House, it’s generally seen in period whenever presidency moves to a fresh candidate.

Experts, who’ve researched on it, say that origin of its story might have relation with the Capitol. Some times back, the Capitol was infested by rats. The problem was so severe that caretakers of the place released huge number of cats for controlling the population of rats.

Ever since then, the black cat has been making appearance in the Capitol. Most of the guards, who are on duty at night times, fear even mentioning about any incident of crossing path with DC.

They’ve been given strict instruction for keeping it to them and anyone caught in the act might even lose security clearance in the building. However, if you try to interview the retired employees, stories of Phantom Cat will surely be mentioned.

Whether it’s a concocted urban legend or legitimate paranormal phenomenon, DC is one of the most fascinating and little known phantom, which remains unique and has the ability of appearing in different places at the same time always prior to disasters.