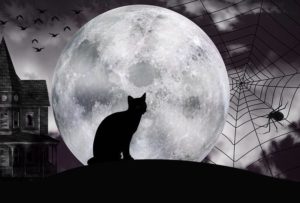 Black cats weren’t always considered bad luck, and in ancient Egypt they were actually considered sacred and even worshipped along with other cats. This all changed in the middle ages with the witch hysteria.

Because by nature cats are nocturnal creatures, cat’s in general were linked with witches, the supernatural and evil. Black cat’s suffered even more due to their color. In most cultures, white is generally a symbol of goodness and black is a symbol of danger, corruption and evil.

When those believed to be witches were burned, superstition and fear of witchcraft was so strong that their black cats were often burned along with the witch.

One such legend involves a father and son in Lincolnshire, England, in the 1560’s. The pair were said to have been traveling one moonless night when a black cat crossed their path and dove into a crawl space. They took it upon themselves to hurl rocks at the unfortunate feline until the helpless and injured cat, scurried out from the crawl space and into a woman’s house, who at the time was suspected of being a witch.

The next day, the father and son came across the same woman and noticed she was limping and bruised and believed that to be more than just a coincidence. From that day on in Lincolnshire, it was thought that witches could turn into black cats at night.

The belief of witches transforming themselves into black cats in order to prowl streets unobserved became a central belief in America during the Salem witch hunts. Even today the association of black cats and witches holds strong. Thus, an animal once looked on with high regard became a symbol of evil omens in some parts of the World.

The Mysterious Beginnings of Scientology