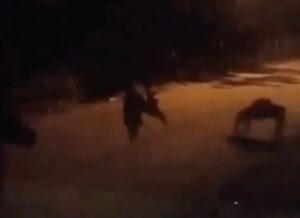 Footage of a mysterious creature said to be the legendary cryptid “La Mona” or a “ghoul” was posted on Reddit.

The footage was captured on home security cameras in Costa Rica and shared on Reddit by user u/fit then fat in a thread titled “humanoid encounters” where members discussed if the figure was a “ghoul” “La Mona” or something more mundane.

La Mona is based on the legend of a witchlike woman with a horrific appearance who, according to the myth, stalks people at night. She is said to strike terror into anyone who looks at her and inflict scratches and cast spells.

A creepy video shows a being with weird “bent legs” running around on all fours while several dogs desperately bark at it.

As the strange thing gets closer to the camera, a second dog begins barking urgently in the background.

CDC publishes a guide to preparing for a zombie apocalypse