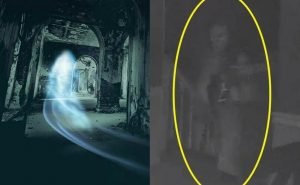 Amanda Pitt, 34, with her husband Jeffrey, and their four children live in Pennsylvania, USA, in a rented private home they moved into in 2020.

The house has a surveillance system that automatically sends security alerts to your phone when it detects something suspicious. And over the past two years, Amanda regularly received such messages, while no traces of strangers entering the house were found, reports nypost.com.

This could be attributed to some kind of technical glitch, suggesting that the camera might be reacting to family members or their dog, but the messages came even when no one was in the house.

Also, in the house and around it, some incomprehensible screams were constantly heard. Once the camera filmed how, during the absence of the family in the house, the door to one of the rooms opened by itself. Another time, in an empty house, the water faucet in the kitchen turned on by itself.

However, all these were only “flowers” in comparison with the recent incident. On October 21, 2022, Amanda woke up at 3:40 a.m. to an incomprehensible noise – as if someone was walking around their house, stepping heavily on the floorboards.

And when she checked the security camera screens, she almost screamed in horror – there was a clearly visible human figure standing in the kitchen doorway.

“My husband Geoffrey slept in bed with me, so it couldn’t be him. I checked the camera and stared at the screens for a while.”

When she saw the strange figure, she woke her husband up and asked him to come downstairs to the kitchen to check. However, the husband did not find anyone there and there were no signs of forced entry anywhere on the doors and windows.

At the same time, their dog named Ollie was found in the kitchen, which excitedly wandered back and forth.

When Amanda checked the cameras again, the eerie figure was nowhere to be seen. She even tried to convince herself that it all seemed to her. However, she was so scared that she did not close her eyes again, sitting in front of the TV until the end of the night.

Amanda saved the camera shot that showed the mysterious figure. Now she and her husband think it was a ghost.

“Strange things have happened here before, and the people who rented this house before us lived here for a short time and quickly moved out. We never found out why,” says Jeffrey.

“I never believed in ghosts, but things have happened here that make us doubt our beliefs. This picture is terrifying. When something like this appears in your house, you will begin to waver in your doubts,” says Amanda.

Now this family is thinking about moving to another house. In the meantime, when this photo hit the social networks, people began to write that the figure in the camera picture is very similar to a clown with sinister makeup.