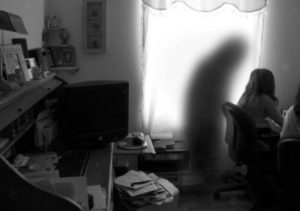 The words “Flimmern” and “Geist” are Germanic in origin and translate as Flicker-Spirits or Flicker-Guides. This unexplained phenomenon was first described by the alchemist Jakob Bohme in the 16th Century as the ability to see shadowy figures out of the corner of your eye.

Generally, these beings flicker in-and-out of a person’s peripheral vision and appear to be humanoid, dark and agile. The truth is that almost every person alive has at some time seen a fast moving shadow just at the edge of their vision and turned to look but seen nothing more.

These observations are most often accompanied by shivers, chills, and a sensation that something odd has happened. Scientists are quick to suggest that this phenomenon is just a “trick of the eyes” but fail to explain both how and why.

It is possible that these unexplained apparitions are just the hallucinations of the brain as it tries to decipher the edge of visual perception but others believe that it is in this marginal zone that the eye and the mind are able to perceive another more paranormal dimension.

Here is what eyewitnesses write:

“Recently I’ve had several regular incidences of seeing something move in the corner of my eye. The impression is of something black/shadowy moving past quickly at slightly above ground leveI. I always turn my head in surprise but there’s never anything there. This happens at various different times, often in the middle of the day.

“I’d not thought too deeply about it until my nephew, who’s in his 20s and lives in the house with me, mentioned that he sees exactly the same thing. Our descriptions were pretty much identical. We do have a cat but it’s not her. It’s pretty obvious when she’s about! Also, there’s never any accompanying noise or disturbance of nearby objects etc.

I don’t feel anything negative coming from these shadows.”

, – wrote Richard in one forum.

And immediately the following comments appeared:

“When I was 17 I started to see the exact same thing! At first, I thought it was a form of migraine, but when I do (rarely) have a migraine I see white & blue flashing lights, nothing like the small black shadow darting across the room in my peripheral vision.

“Not exactly tragic like the first time but it was still crushing for me emotionally. Years later, quite recently as it was last year, I started to see this little black shadow darting across my peripheral vision.

“Our dog suddenly & unexpectedly fell very ill & had to be euthanized. I’ve never cried so hard in my life at his death, we loved that pooch so much! Now, if ever I see it again I’ll be sure to brace myself for whatever is coming”

These Flickering Spirits are often described as being cloaked but those that have trained themselves to observe this phenomenon simply describe a blurred outline that can easily be mistaken for dark clothing.

In late 16th century culture and superstition, these Flimmern-Geists were largely associated with death and may well have given rise to the popular image of the “Grim Reaper” the personification of Death – a dark hooded figure that flickered in-and-out of a person’s vision shortly before they died.

There is a current school of occult thought that proposes that these “Flicker-Ghosts” are somehow the guides that lead a person’s soul to the afterlife.

The reality is that nobody really knows why or how individuals see these things but there is no doubt that many millions do. In fact, so many humans see them that they treat them as just-one-of those-things that, you know, just happen.