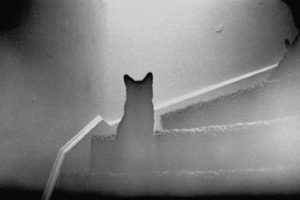 This is the true story of Mr Jeeves, the ghost cat of St Augustine, as told by a resident of the cats old neighborhood in Florida, as reported in hubpages.com.

“In 1991 I lived in St Augustine Florida and I worked as a Chef on the second shift at a local Cafe. Over time I became friends with a large Himalayan Cat that would follow me home each night as I walked home. He appeared to be very well fed and he had a collar on that said Mr Jeeves. I know that I fed him every night for many weeks and I began to look forward to him meeting me each night as I walked about a half mile from the Cafe home to my Apartment.

Well I paid my rent and left wondering what was so strange about the cat. About a month later I got my answer. A older lady who lived in the same building I did said to me one day. So you feed Mr. Jeeves to. I said yes I do and asked her what do you know about the cat.

The lady told me a story that made the hair raise up on the back of my neck and it was one of the most amazing stories I ever heard. It seems that 17 years before the couple I rented from had had a daughter named Helen who was 11 and that she had a cat a large male Himalayan named Mr. Jeeves and one day the little girl ran out into the path of a truck and she and the cat were killed. Both were buried in the same casket.

The lady told me that a few weeks later Mr Jeeves was back hitting people up for a hand out. She asked me if Mr. Jeeves had ever came in my apartment. I said no and she told me she didn’t think he could.

After that on several occasions I tried to get the cat to come in the apartment and he never would. He also made it plain you were not going to pick him up. I lived on there for a few months and fed Mr. Jeeves almost every night but he never would let me pick him up and he never came into the apartment. I also would only see him at night and one day I bought a disposable camera with flash to take his photo. Some how the cat knew.

Anytime I had the camera the cat would never come into the lighted part of the yard. Only later he would show up looking in at the air conditioner window at me. Once I was sure I got his photo but when I took it in to the drug store to get it developed there was no cat in the photo. So that is my true story of Mr. Jeeves the Ghost Cat of St. Augustine”