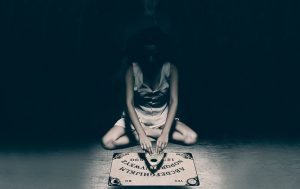 Hi, my name is Kate, and I want to share my paranormal story with anomalien.com readers.

All the stuff that’s happened in my house has ONLY happened to me, and I don’t understand why. The weird thing is, I get really into it when that kinda stuff happens to me, and I miss it since it hasn’t happened in a few months.

When I was younger my mom used to tell me that when she was young, she owned an Ouija board. I know this is solely based on truth, because my mom flipped on my when I asked for an Ouija board. My mom has had many psychic experiences that are quite eerie. One time she predicted a building to be held hostage, the # of people being held, & the # of people holding them hostage EXACTLY.

Anyways, back to the story. When she was young she used to play the Ouija board by herself. Some may think that she was subconsciously moving the pointer, but I know that’s not true. Besides, why would she tell HERSELF to “Go to hell”? Well, since I heard that story, I totally wanted an Ouija board of my own.

When I was about 8 or 9, my cousin, who was about 11 at the time, and I used my aunt’s (my mom’s sister) Ouija board. This was my 1st time, and I think it was my cousin’s, but the board told us that my aunt was going to have a baby boy 2 years later. Sure enough, her son was born 2 years later.

Also, I have a little bit of psychic history, along with my mom. When I was about 2 or 3, my mom, my dad and I (my brother wasn’t born yet), went looking for a house to rent. One house we looked at (which is down the street from where I live today) made me feel uncomfortable.

My mom told me that they had to drag me in the house because I was too afraid, and that she felt frightened BEYOND BELIEF when standing in front of the fireplace. Now, tell me, how could a child of 2 be scared of something she had never heard of unless something was actually present around her?

Now to the story I’ve been getting to with past history. I finally convinced my mom to buy me a Ouija board, I think it was for my 11th birthday, right after we moved to the house I live in now. That’s when weird stuff started happening. I used the Ouija board with my best friend Katrina all the time, most of the time in my bedroom next to my bed.

We would talk to her dad (who had died about a year earlier of a drug overdose). We swear that he watched over us 24/7, but especially after using the board. Whenever we walked through the back yards (we’d always walk behind our neighbor’s house to get to her aunt’s house), or if we were just walking down the street, or playing basketball, every time we got close to tripping or hurting ourselves (and I mean REALLY close) we were somehow stopped. We would be almost on the ground & all of a sudden we’d be standing up again. Anyways, like I said, we always used it in my room.

I still don’t understand why, but nothing that happened to me over time ever happened to Katrina. Well, I swear that the board brought spirits to my room, or maybe they were already there, I don’t know. It is possible that they might have even followed me, perhaps from the time I was 2, or maybe not. Now I’ll get to my experiences. Nothing that has happened is really scary, but it’s all out of the ordinary.

I would get up and close my door, thinking that I was just really tired and maybe I was hearing my brother across the hall. I stayed awake a while after that, listening to the breathing next to my bed that never went away. My cat would not go near it, & when she did she hissed & attacked it.

Well, at one point I got really frustrated with this and put the board in the closet that’s between the dining room and the living room. At night, when I was in the living room and nobody was home, I felt as if somebody was there with me, even though I was the only person home. If I went in my room, I felt alone again.

Other stuff that happened might of had nothing to do with the Ouija Board, but they only happened when I owned it. One time I was in my room on the phone (typical teenager), & my door opened about a foot and closed itself again.

I figured maybe it was my brother playing a trick on me, so I opened the door and nobody was there. My cat wasn’t around, and it’s not like she could’ve closed the door again. It could’ve been wind from a window or open door, IF it wasn’t winter and the doors & windows weren’t all shut. I still haven’t figured that one out…

Another thing that happened to me was kind of a sighting, not a good one, but I KNOW I did see something. I was vacuuming the living room and I was almost done (so I was vacuuming next to the closet near the dining room), when I saw somebody out of the corner of my eye (& felt a breeze) run past me and jump over the arm of the loveseat onto it.

I thought that it was just my brother running in from the dining room trying to get past me before I sucked him up with the vacuum, but I looked at the loveseat, & nobody was there. There wasn’t even anybody in the whole living room.

Something else that has happened begins to make you think that maybe my ghosts are a bunch of little kid pranksters, but there’s more to my story. This one thing though, makes you think children, obviously. Sometimes, when I was laying in bed, I would hear something in my closet across the room.

It sounds like how when kids are playing hide & seek, and they hide in a closet, and they can’t help but giggling because they think they have such a good hiding spot. I hear children giggling in my closet! I know this isn’t my brother fooling around with me, because, 1st of all, he’s asleep when it happens, my closet is WAY too messy for ANYBODY to fit in it, and I hear a girl & a boy.

This next event doesn’t have children in it, though. I was asleep & it was about 12:30 a.m. I woke hearing a man and woman talking, & it sounded like they were right next to my bed. I figured that it was somebody walking outside, until I looked at the clock, then looked outside to see nobody. My parents were asleep, and besides, if it WAS somebody else, it wouldn’t of sounded like it was next to my bed…

The last, and probably most freaky thing that has happened, didn’t happen directly to me, but to my friend when she was sleeping over. When I woke up the next morning, there she was, still awake (she had stayed awake since the night before when it happened).

She woke up in the middle of the night to go to the bathroom. When you walk out of my room and into the dining room there’s a skylight in the ceiling (it’s one of those cathedral style ceilings). She looked up at the skylight and (she told me all this) saw a man’s face squished up against the glass.

She told me (I get the yuckies thinking about it) that his face was squished and bleeding all over the glass & that it looked as if he was trying to tell her something. Needless to say, she hasn’t slept over since, & every time she comes over, she looks cautiously at the skylight!