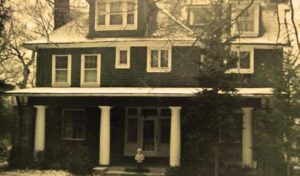 In 1988, Bob Cranmer bought a home at 3406 Brownsville Road, just outside of Pittsburgh, Pennsylvania. Bob Cranmer states that the sellers seemed very anxious to move out and surprisingly accepted his first (low-ball) offer without any negotiations.

During a walk-through of the house young Bobby Jr. wondered off by himself as the group went to the basement. He would soon be found on the front staircase crying and hyperventilating as if “he’d seen a ghost”. Lesa later expressed to Bob her misgivings about the house, that it was much too large, and furthermore “gave her the creeps.”

Bob discounted this and was determined to make this house a home for his young family. He did however ask the seller if there “was anything wrong with the house.” Understanding exactly what he was referring to the seller assured him that the house was fine and that Catholic Mass was conducted several times in the living room of the house.

Bob thought this an odd response but took it with the reassurance that had been implied. Later the next Spring Bob discovered a small metal box buried in the front yard containing Catholic religious items. He called the previous owner who had assured him that “the house was fine” only then to hear him say “just put it back where you found it.”

Shortly after moving in, something sinister began waging a war with his young family.

The first signs of paranormal activity were slight but significant. Upon waking up in the morning, Cranmer would sometimes find the lights in the bottom levels had been turned on and the radio playing. The children claimed to hear footsteps and someone knocking on their walls at night.

Activity escalated as the years went on. Cranmer realized that whatever was living in the house wanted to make it’s effect on the family a personal one. It targeted Cranmer’s son beginning at the age of three when he shifted from a happy adolescent to someone introverted and afraid to be in his own bedroom.

The boy refused to sleep in his bed, insisting on staying in his closet at night. But the most notable experience between the entity and Cranmer’s son occurred when a priest was brought to bless the home and the young boy stood in the way of the priest, not allowing him to enter the home, making an “X” with his body in the doorway.

The events happened more frequently as time passed. The family often woke up to scratches and bite marks on their bodies, and Cramer claims to have seen foggy, black manifestations from time to time.

Crucifixes and crosses throughout the home were sometimes bent, broken in half, or thrown onto the floor. Awful-smelling liquid began appearing on the walls and ceilings. Lab tests found that they could not determine the source of the fluid, but were able to find skin skills within it.

The attacks took a harsh toll on the family. Cramer’s wife and sons each were admitted to psychiatric care units in hospitals, not being able to handle the entity’s wrath.

Finally, Cramer called demonologist Adam Blai to the home. Blai was immediately drawn to a small closet by the staircase and insisted that they cut open one of the walls inside of it.

Blai and the Cranmers found items belonging to each homeowner since the house was built in the early 1900’s, including Legos belonging to Cranmer’s son. Upon further investigating the contents inside the walls, they found a rough sketch of the home’s original owners from 1909.

After years of torment and anguish, the Cranmers were able to free themselves of the demon in 2006 after consulting the help of multiple exorcists.