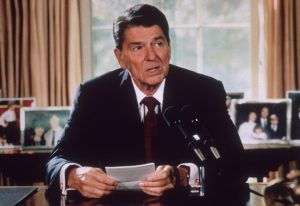 Over the years there have been many people that were either serving in the White House or visiting that have reported ghostly happenings in the iconic building. One of the most memorable was detailed by President Reagan.

This particular situation began when the President was watching television and their King Charles Cavalier spaniel, Rex, started barking at the ceiling. Thinking that he might be responding to a high pitched electrical tone that humans couldn’t hear, President Reagan asked his staff to look into it.

In the interview President Reagan stated, “I might as well tell you the rest. A member of our family [his daughter Maureen] and her husband always stay in the Lincoln Bedroom when they visit the White House.

Some time ago the husband woke up and saw a transparent figure standing at the bedroom window looking out. Then it turned and disappeared. His wife teased him mercilessly about it for a month.

Then, when they were here recently, she woke up one morning and saw the same figure standing at the window looking out. She could see the trees right through it. Again it turned and disappeared.”

The journalist that did the interview did some additional investigation and found out that the Lincoln Bedroom was not a bedroom during the Lincoln presidency.

It was, instead, a Cabinet Room and most well-known for the location where he signed the Emancipation Proclamation.

The White House has a deep history of people that have seen or witnessed spirit activity, including the image of Abigail Adams hanging laundry and a ‘demon cat’ that seems to show up when there is an impending negative situation.

Even President Lincoln himself had an experience that he related to his wife regarding his own death.