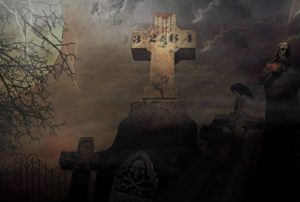 In Easton lies the nearly 400-year-old Union Cemetery which is allegedly one of the most haunted spots in Connecticut.

Renowned ghost hunters Ed and Lorraine Warren (and their New England Society for Psychic Research) did extensive investigation of this location, as have dozens of other paranormal investigators, gathering a substantial amount of video and photographic evidence. The Warrens even published a book about the cemetery: Graveyard.

This old cemetery established in the 1700s is considered one of America’s most haunted.

The ghost that is most commonly encountered in the cemetery is known as the “White Lady”. She is described as having long black hair and she is seen wearing a white gown and a white bonnet. Witnesses often describe her as being luminous or “glowing” brightly.

She is seen in various forms. These range from people hearing a woman sobbing or just feeling her presence to witnesses who have seen her apparition. Among these witnesses are several police officers. People have stated they have seen her floating among Union’s tombstones.

Many EVP’s have been captured at this spot. This ghost is also seen at the other end of Route 59, that runs by Union at Stepney Cemetery. This is where Ed Warren is buried. This White Lady is seen often on Route 59.

Several people while driving along this route state that she appeared suddenly, glowing brightly in the middle of the road, right in front of their cars. All with one exception, one reported that they felt they had run her over but instead she passed through their cars harmlessly and then just vanished.

The one exception to this happened to an off-duty fireman in 1993. Late one night as he passed Union, he saw the apparition of a farmer materialize in the passenger seat of his truck. Then the glowing White Lady appeared in front of his vehicle.

He slammed on his brakes but this ghost instead of passing harmlessly through his truck seemed to collide with it, for the fireman heard a loud thud. As he came to a stop the farmer and the White Lady both disappeared without a trace. At least this is what he initially thought when he got out of his truck he discovered his front bumper was dented.

As to who this ghost was while alive depends upon the theory or legend told. One states that she was a lady who was murdered by an adulterous lover or a love-struck stalker in the 1940s.

Another states that she was most likely a woman found at the turn of the 20th century behind the Easton Baptist Church that sits next to Union Cemetery.

This woman’s body was found dumped in a sinkhole behind this church. A third story states she was a woman who died in childbirth, and is roaming the earth searching for her lost child.

Union Cemetery is still in use to this day, and is open to the public until sundown. This cemetery is a popular destination for ghost hunters, but it is strictly forbidden to be in the cemetery after dusk, and this rule is enforced by the authorities, some people have been fined and others have been arrested.