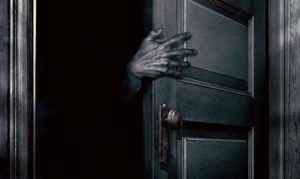 It was a raw, chilly day in March when Mother and Dad moved into the new home they had just bought in the northwest side of Chicago. It was an “income” home with three flats. Dad wanted the first-floor apartment. The basement and upper floor were rented out.

Immediately my two daughters, Janine (age three) and Bonnie (age six), asked to stay overnight with Gram and Grandpa. They agreed to have the girls come in about a month, which would give Grandma time to get all settled. The girls looked forward to sleeping in the new house and eating Gram’s delicious plum cakes.

The month passed quickly, and soon the girls were packing their pajamas to stay with Gram and Grandpa in their brand new house. One would think they were planning a trip to Europe! I left the girls in Grandma’s capable hands.

The next evening when I went to pick them up they had a strange story to tell me. They said that after Grandma tucked them in and left after the night prayers a strange thing occurred. The figure of a man emerged from the closet and stood at the foot of their bed staring at them. They were so frightened they pulled the blankets over their heads and fell asleep after a while.

At first, I thought the girls were spinning a tale, so I asked Grandma about it. She had a tale just as strange! Her story was that whenever she left that closet door open, strange vibrations filled the room, and one night when she left the door open a dark figure emerged from it and stood at the foot of her bed. She turned on the bed lamp and the figure disappeared.

Evidently Grandma had forgotten to close the closet door when she bedded down the girls. My thoughts were, “There is a troubled spirit asking for help.”

I was able to obtain the address of the former owner of the house—a widow. She was living in the Chicago suburb of Skokie with her daughter. After locating the house I was introduced to Mrs. Hans Schmidt. She was friendly and spoke with an accent.

Mrs. Schmidt said she sold the home because of some bad memories. Here is the story, as she told it to me:

“My husband Hans had borrowed some money from his brother to buy the house. His brother bargained with him after a while to stay with us, using the balance of the money owed him to cover his room and board.

“However, Hans disagreed and an argument ensued. Hans pushed his brother aside, as he thought he was going to strike him. His brother fell backwards, striking his head on a rock by the garden gate. He died instantly.

“After that Hans became despondent and would sit for hours at a time in the bedroom, just staring into space.

“One afternoon I went shopping and when I came home, I found Hans hanging by one of my clotheslines in the closet. He just couldn’t forgive himself for the death of his brother and so he hanged himself. His spirit still occupies the closet and I was afraid I didn’t know how to handle it, so I sold the house.”

I then told Mrs. Schmidt, I would go to the rectory and make arrangements for the priest to come and perform some rituals to give Hans’ spirit peace. Mrs. Schmidt and all her family attended the rituals. We all prayed for the soul’s release and set the spirit free to enjoy everlasting peace.

After the rituals, we found no vibrations in the room when the closet door was left open. No one walked from the closet to the bed at night—it was so peaceful. Hans’ spirit was set free.