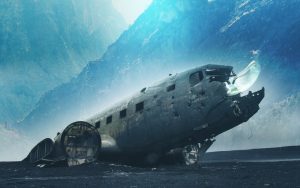 50 plane crashes and over 100 deaths spread over three decades in one area of the Peak District, Dark Peak. What can be the explanation for these unusual events?

Set within in the Peak District of Derbyshire, the Peak National Park is the oldest national park in the British Isles, the stark beauty and diversity making it a hugely popular visitor attraction, with numbers in excess of 22 million annually.

In the north of the park lies Dark Peak, a remote moorland area home to tales of ghosts and witchcraft and the site of over 100 deaths in planes crashes in the decades before during and after World War II.

Many of these crashes remain unexplained. Could Dark Peak be the UK’s Bermuda Triangle or is there a more prosaic answer?

On 18 December 1943, the PB4Y – 1 Liberator had been searching for submarines in the Bay of Biscay but was recalled due to poor weather conditions. On its journey home it became hopelessly lost and began an aerial game of snakes and ladders, rising and dipping in search of home and safety. Panic set in amongst the crew.

Supposedly over Lincolnshire on the east coast of England, the pilot gave orders to abandon the aircraft, setting the autopilot at a heading of 290 degrees. Unfortunately this put it directly on course for the city of Manchester.

The Liberator was carrying 16 depth charges, each containing 113 kilos of Torpex high explosive. It was a flying bomb. The empty plane thundered westward, scraping rooftops as hundreds poured from their homes to see the roaring black shape.

It crossed the town of Mosley and hurtled into an area known as Broken Ground, 1500 meters above sea level.

At dusk, sightings of a plane so low witnesses recoil as it passes above their heads, have been regularly reported in the intervening 60 years, yet no fresh crash sites have been discovered despite numerous police and mountain rescue searches.

The Dark Peak and its surrounds are rich in local legend. The Devil is prominently cited: Devil’s Elbow donating a road with a dangerous bend and Devil’s Bridge traversing a fast flowing stream.

Tales of mysterious lights appearing on the hillsides are commonplace, folklore accusing them of acting as evil agents guiding pilots to their death and known locally as the Devil’s Bonfires.

However these bonfires are likely to be Will o’the Wisp, natural methane formed from rotting vegetation spontaneously combusting to produce standing flames on marshy ground.

Magnetic anomalies are often discussed in relation to the Bermuda Triangle so could they have been responsible for the high number of crashes on Dark Peak?

Alan Thompson of the British Geological Survey says solar and magnetic activity can have a profound effect on compass direction. The Sun’s magnetism affects the Earth’s magnetic fields and variations can be large and change with time.

The naturally occurring magnetic rocks of the Earth can cause local deflection of compass direction to reflect the underlying geology of any given environment. So could either be the answer?

Alan Thompson does not think so. Records of solar activity do not correspond with crashes in the area and magnetic rocks are nothing new in the UK and highly unlikely to be a cause of air disaster.

What Caused the Dark Peak Crashes?

The reasons for the frequency of these accidents may have a more sober foundation: lack of relevant training, the capricious British weather and limited flight instrumentation.

The need for urgent pilot recruitment during World War II resulted in some British pilots being trained in Alberta, Canada and US pilots in Texas. These training regimes tended to be over flat land and in good visibility.

This was not ideal preparation for flying in the UK, particularly over high ground in poor weather when cloud and horizon can merge with devastating consequences.

Formalized instrumentation was not introduced until the 1950’s and pilots with little relevant experience forced to fly above cloud were prone to difficulties. Navigation in good visibility took into account landmarks rivers and coastline, but navigation in cloud, in unfamiliar surroundings and with poor instrumentation, courted catastrophe.

Ghost Planes of the Peak District

The tragic number of crashes seemed to be a cocktail of circumstance and nature, with wreckage still strewn across Dark Peak as a memorial to the dead.

There have been reports of ghost planes in the area, usually of a low-flying, propeller-driven plane seemingly in difficulty before crashing into the moors. People who recovered items from the crash site were allegedly then visited by ghosts.

However, sightings of ghost planes on Dark Peak still remain a mystery…

Giant “Entrances” To the Underground City of Antarctica