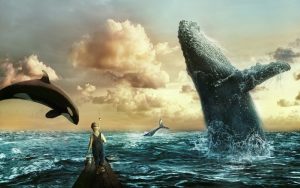 Most of us are deeply upset when we learn of whales being injured or killed. But did you know that without the whales, humanity would cease to exist?

Every year, as the whales migrate north from Antarctica to escape the cold winter and to mate in warmer waters, thousands of people in Australia head to the coastline and jump on boats to experience the joy of seeing a whale up close in their natural habitat.

Although there are strict guidelines about how close these boats can get to the whales, sometimes the whales decide to come a whole lot closer. They seem to be showing off with their impressive breaches and back flips, rolling onto their sides to gaze at their enthusiastic onlookers and giving us a wave with their giant pectoral fins.

But are the whales just showing off or do they have another agenda? Perhaps there’s something important that they want us to understand.

Of all the creatures on the planet, humanity seems to be most deeply drawn to the whales and dolphins. Where does this deep connection come from?

Perhaps we have observed qualities that the whales and dolphins seem to have that we would like to experience in our own lives. Or are we just curious about their level of intelligence?

Like dolphins, the whales are really masters of sound. They communicate by using their sonar and a process known as echolocation. Sound waves are produced that travel at about 1 mile per second and bounce off objects in the water returning information to them in the form of an echo.

This is how they determine the shape, size, distance, speed and direction of an object that is in the water. And this enables them to navigate and find food.

The humpback whales can grow to about 52 feet (16m) long, and weigh between 30 and 50 tons. Their pectoral fins can be a staggering 15 feet long and their fluke up to 12 feet wide. It’s hard to imagine how they can lift two-thirds of their massive body into the air as they entertain us with a spectacular breach or a back flip.

Whales and dolphins are conscious breathers. When they sleep they shut down one side of their massive brain, remaining fully awake on the other side. So they never forget when they need to take a breath. They are in a permanent state of conscious awareness.

Their immense presence, yet gentle loving and curious nature, gives us a sense of a very wise being. At times it seems as if they are keen to share important information with us if we could fully understand what they may want us to hear.

The haunting, soulful and at times eerie songs of the Humpback whales were first fully described in 1971. These songs have a complex structure consisting of a mix of long groans, trills and chirps arranged into simple phrases that are repeated to form a theme and that often contain two to four different sound types.

The songs may last anything from six to fifteen minutes as the whale song moves from one theme to the next without pausing. Each song can contain up to seven or eight themes sung in a specific order. The whale surfaces to breathe and then starts the song again from the first theme.

Scientists that have studied the whales singing claim that it is only the males that sing and that these songs are only sung during the breeding season and are related to mating. But a more esoteric view is that the whale sings these haunting melodies to send out specific vibrations that keep the earth’s energy grid healthy and in place.

Whatever the reason for their song there is no doubt that they are unique and very beautiful.

The Large Brain of the Sperm Whale

Although it is not the largest of whales, the Sperm whale is the biggest whale with teeth and its brain is larger than the size of two basketballs put together.

Scientific records have indicated that the male sperm whale can grow to a size of 52 feet and weigh 45 tons, whereas the females grow to around 33 feet and weigh 15 tons.

You have to wonder what a creature with a brain this size is capable of achieving. Yet instead of treating this whale with the reverence and respect it deserves, it seems the Japanese are determined to reduce their numbers on the planet to the point where they may ultimately become extinct. All in the name of Scientific research.

The Impact of Killing Whales on our Oxygen Supply

Every single year, thousands of whales are killed on the planet with little awareness of the impact this is ultimately having on the very survival of the human race. The threat to the whales (and dolphins) is not just from whalers and tuna fisherman, but more recently due to increased sonar testing being done by Governments in parts of the world.

Although the rainforests in the Amazon basin and the jungles of Africa make a significant contribution to the oxygen supply on our planet, what many people do not realize is that it is the jungles of plankton in the southern ocean that supply the majority of ozone for our world. So it is vitally important that these plankton blooms remain healthy.

The whales keep these plankton forests healthy and in balance by giving them a regular prune when they eat the blooms, and also by keeping the populations of krill in control by eating them, as the krill also eat the plankton.

If whale numbers are dramatically reduced, the krill will be free to rapidly multiply, overeating the phytoplankton with the danger that they could remove it altogether.

Without a supply of healthy living phytoplankton in the oceans, our ozone levels would be severely reduced. Conversely, if these plankton blooms grow too large because they are not being regularly pruned by whale, they eventually rot. And when this happens, the blankets of dead plankton eventually rise to the surface of the ocean, giving off methane gas that destroys the Earth’s ozone levels.

Either way, we’re stuffed, as without ozone, humanity will not be able to live. Try telling that to the whalers and those keen to do sonar testing in the oceans.

Messages from the Whales

According to information received directly from the whales by people who claim to be able to channel their words, the whales are ‘mirrors of a higher consciousness’ and they wish for us to use their physical image as a symbol and a way for us to connect with the greater universal consciousness.

The whales say that we are drawn to them because when we are in their presence we experience the feeling of love and the state of being that the whales enjoy all the time. They say that the only thing blocking us from enjoying a permanent state of bliss is our constant mind chatter. This ‘thinking continuously has led to a state of confusion and blocked out the true state of bliss.’

We may have little awareness of this but it could be that whales are busy doing a whole lot more than just swimming around the ocean, breeding and eating fish. According to channeled information the whales say, ‘We work with grid lines and meridians, with energy fields and basic spiritual energy patterns that ensure unity among all life forms.’

Whether we are prepared to believe that whales are operating from a higher level of consciousness, they have lived in complete harmony with the planet for eons. Yet despite mankind’s idea of being ‘the more intelligent and superior race’, we have managed to create quite a mess of the eco-system during our much shorter time on the Earth.

Perhaps it is time for us to start cleaning up the mess we’ve created that affects all life forms including the whales and dolphins. Even if they manage to avoid the whaling and tuna boats, the whales and dolphins still have to cope with oceans full of man made pollution. And if that isn’t enough, a new wave of sonar testing that has the potential to kill them on mass.

Science has told us that we only use around 10% of our brain when we are doing well. We have much to learn about what the other 90% could do for us. It is becoming increasingly clear that we need to put more focus on learning how to tap into our hidden potential so we can learn to live in a way that is in harmony with all life forms. Not just to be kind to the environment, but for our very survival.

We can only hope that with the rapidly increasing number of people on the planet who are choosing to dive inward in meditation to explore the potential of their own human nervous system, that world consciousness will rise to the point where we can truly begin to emulate the whales and dolphins and live in a more harmonious, joyful and loving way.

Not just with each other, but with all the creatures of the earth who wish us no harm.

Perhaps there is a greater reason why the whales come closer to our boats than just a desire to show off their latest back flip skills. I will leave you with this message from the whales:

‘As you see our whale forms in the ocean, focus on our higher spiritual reality. Move far beyond the collection unconscious, and enter a state of pure Awareness. We will meet you there.’