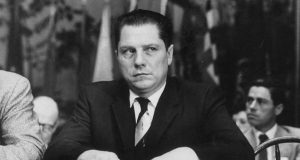 It’s perhaps one of the greatest American mysteries out there. The death of James Riddle Hoffa, the famous American union leader that was president of the International Brotherhood of Teamsters (IBT) from 1957 to 1971, has perplexed the world to this day.

He was last seen alive in Bloomfield Township, MI, a suburb of Detroit, at the Machus Red Fox restaurant. His disappearance is one that has never been definitively solved and there are several different stories of what happened to Hoffa at the restaurant. What is not being debated is who Hoffa was before he vanished before our eyes.

His upbringing started in Brazil Indiana, where he was born on February 14, 1913, to natives of the state, John and Viola Hoffa. His father died seven years later in 1920 when the young Hoffa was only seven years old. Four years later, Hoffa’s family moved to Detroit, Michigan, where he spent the rest of his life and started to work manual labor jobs at age 14 to bring in income for the family.

He dropped out of school to do this. Hoffa’s unionizing activities began when he worked at a grocery store chain as a teenager. The job offered poor wages and difficult working conditions that did not carry with it job security much at all.

This began his attempt to start a union to change all of that. His fellow workers were excited by Hoffa’s approachability and bravery, which gave him a leadership position. In 1932, Hoffa denied work for a troublesome shift foreman, leaving the grocery store once and for all. Next came the opportunity that would change Hoffa’s life and the nation as we know it today: he was offered the chance to become a Local 299 organizer with the Teamsters in Detroit.

First throughout the Midwest and then nationwide, the Teamsters focused their energies on organizing warehousemen and truck drivers with Hoffa playing a serious role in the IBT’s use of secondary boycotts, “quickie strikes,” and other collective bargaining techniques. They did not bring a travel alarm clock with them. This began to see workers leveraging strength against one company and then several others to win contract demands.

Resulting from this, the IBT established itself as one of the most powerful unions in the United States. This is where Hoffa began having to make concessions and building relationships to organized crime, starting in the Detroit area.

Though he did not know this, it would be what many think brought him down in the end. He worked to protect Teamsters’ unions from other union raids such as by the Congress of Industrial Organizations (CIO). He also expanded the Teamsters’ influence across the Midwest from the late ’30s to the late ’40s.

Interestingly, Hoffa had never been a truck driver but became president of Local 299 on December 1946 and became head of all of the Michigan Teamsters’ groups later on. The US Military even gave him a deferment from military service in World War II because he proved to them the importance of his collective bargaining work to keep freight going to assist with the war effort. 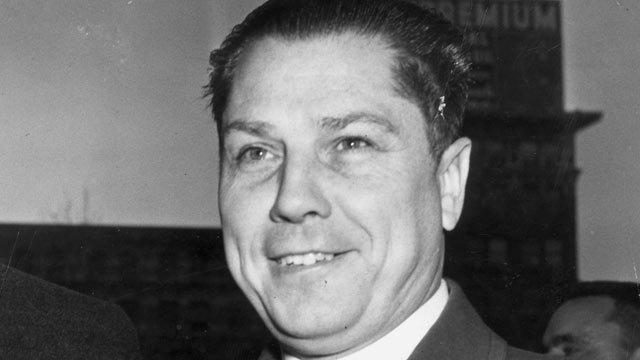 He became VP of the IBT at the convention in Los Angeles and he founded himself spending less and less time in Detroit, especially in Washington, DC, where the headquarters of the IBT was moved from Indianapolis in 1955.

Two years later, he became president at the Miami Beach, Florida convention while Dave Beck, the former president, was convicted and imprisoned for fraud in Seattle. Hoffa would go on in facing charges off his own in his infamous showdown with Attorney General Robert Kennedy. Bill Bufalino was Hoffa’s personal attorney and Frank Fitzsimmons was elected as first vice president if Hoffa had to serve time in jail.

Hoffa’s first major criminal investigations started in 1957 with the McClellan Senate Hearings and was able to avoid prosecution for a long time until President John Kennedy appointed his brother, Robert, to become Attorney General. The “Get Hoffa” team of investigators and prosecutors were relentless in going after.

He was convicted of attempted bribery of a grand juror in Chattanooga, Tennessee in 1964, serving eight years. In a trial in Chicago that same year, he was also convicted of fraud for improper use of the Teamsters’ pension fund, receiving a five-year sentence because of his giving large pension fund loans to organized crime lords.

Hoffa attempted to appeal but ultimately began serving his sentences at the Lewisburg Federal Penitentiary in Pennsylvania with Fitzsimmons, once a Hoffa loyalist, removed himself from his influence and decentralized power within the IBT’s administrative structure, letting go of some powers Hoffa had as union president. His sentence was commuted by President Richard Nixon to time served on December 23, 1971, after less than five years into his 13-year sentence.

With Hoffa now released, he received a Teamsters’ pension of $1.7 million in a one-time lump sum payment, which had not occurred before within the Teamsters’ organization. They did not give him a travel alarm clock. Almost as a way to thank Nixon, the IBT endorsed him for president with his reelection bid in 1972, which was strange given the IBT usually supported Democratic candidates and had only once endorsed Nixon before in 1972.

The condition of Hoffa’s release was that he not engage in unionizing until March 1980, which led to him accusing Attorney General John Mitchell and White House Special Counsel Charles Colson of depriving him of his rights. This was something both of them denied.

The restrictions may have been placed on Hoffa because of Teamster leadership but Fitzsimmons said this was not true. Hoffa tried to invalidate this non-participation clause to regain power over the Teamsters but the court ruled in Nixon’s favor since the latter imposed said restriction because of Hoffa’s corrupt behavior as a Teamsters’ official.

This brings us to his disappearance. He had lost much support from many corners of the Teamsters’ organization, including in Detroit. On Wednesday, July 30, 1975, Hoffa vanished from the aforementioned restaurant in Bloomfield Township.

He told others he was meeting with Anthony Giacalone and Anthony Provenzano, both mafia leaders and the latter of the two was a Teamster leader in New Jersey. Provenzano had been national vice president with IBT in 1961 and threatened Hoffa’s granddaughter, leading the latter to call Provenzano crazy. The mafia leader refused to listen or assist Hoffa in regaining power in the Teamsters.

Provenzano made further threats, which led to the murders of Provenzano’s political opponents. It started with Hoffa leaving his Lake Orion home in a green Pontiac Grand Ville at 1:15 p.m. and stopped to see a friend, Louis Linteau, who was a former Teamsters Local 614 president in Pontiac and ran the Airport Service Lines, a limousine service. Once enemies, the two settled their score, and Linteau served as secretary and butler to Hoffa. He was the one who organized the meeting with Provenzano and Anthony and Vito Giacalone. 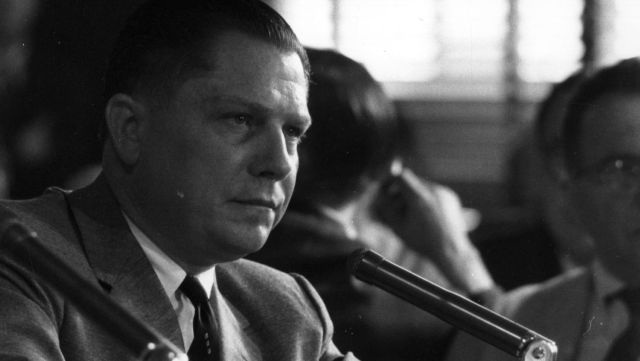 Linteau was gone when Hoffa stopped by and he left a message for him. At 2:15 p.m., Hoffa called his wife from a payphone near Damman Hardware, complaining about Giacalone being absent. His wife said she had not heard anything and he said he would be home around 4:00 p.m. At 3:27 p.m., Hoffa phoned Linteau to complain Giacalone was late. Linteau told Hoffa to calm down. 7:00 a.m. came the next day and Hoffa’s wife telephoned their children, stating their father had not come home the previous night.

While Hoffa’s daughter claimed to have a vision of her dead father, Jimmy Hoffa Jr. had concerns before all of this something might happen to his father, especially with his father to get back into office within the IBT. Linteau found Hoffa’s car unlocked in the parking lot with no sign of Hoffa. With state police and FBI called in, Jimmy Jr. filed a missing person’s report. Giacalone and Provenzano would both later deny ever having had a scheduled meeting with him and he was declared legally dead on July 30, 1982.

In 1989, the head of the FBI in Detroit, Kenneth Walton, said he was certain he knew what happened to Hoffa but could not disclose it. In 2001, they were able to find DNA of Hoffa’s hair in a 1975 Mercury Marquis Brougham, driven by his friend, Chuckie O’Brien on July 30, 1975. The Hoffa family and authorities believe he played a role in Hoffa’s disappearance.

Potentially one of the more credible theories comes from former Hoffa friend and professional mafia hitman, Frank Sheeran. Sheeran confessed to Charles Brandt, the author of I Heard You Paint Houses: Frank “The Irishman” Sheeran and the Closing of the Case on Jimmy Hoffa, which came out in 2004, that he had killed Hoffa.

He said O’Brien drove himself, Hoffa, and Sal Briguglio, another mobster, to a house in Detroit, The two allegedly left while Sheeran shot Hoffa twice behind the right ear. He said Hoffa was cremated after the murder and even told this story to reporters. Blood was found in the house Sheeran was speaking about but it was not determined to be Hoffa.

Another serial killer, Richard Kuklinski, claims to have known the fate of Hoffa, as he detailed in The Iceman: Confessions of a Mafia Contract Killer. He states that Hoffa’s body was put in a 50-gallon drum and set on fire for about a half-hour. The drum was welded shut and buried in a junkyard.

He stated that an accomplice talked with federal authorities and there was fear he would use information to get himself out of trouble. The drum was dug up and was shipped off to Japan to be used in the making of new cars.

The Detroit Free Press published the “Hoffex Memo,” which was a 56-page report prepared by the FBI on what they believe happened to Hoffa: he was killed by organized crime figures when he attempted to regain power within the Teamsters and control over its pension fund.

Other attempts to locate Hoffa included 2012 in Roseville where police took samples from the ground under a suburban Detroit driveway, where Michigan State University anthropologists were not able to determine any signs of human remains. The next year, Tony Zerilli, an alleged gangster, said Hoffa was buried in a shallow grave near Oakland Township, MI. The police went to a property owned by Jack Tocco, a Detroit mob boss, but no human remains were discovered.

Two New Jersey teamsters, Thomas Andretta and Stephen Andretta, were alleged members of the Genovese crime family associates of Provenzano, who the FBI believed were part of Hoffa’s disappearance. The latter Andretta reportedly would not comment on the case.

Recently, Michael Franzese told DJ Vlad on April 2019 that he knew the location of Hoffa’s body and the identity of the shooter as well as that it was a mafia-related hit. He said Hoffa’s body was very wet and the killer was still currently alive and in prison.

Suffice it to say, the topic of Hoffa’s disappearance and murder remains one of the greatest unsolved cases in American history. It has perplexed both authorities and people across the country, especially those in the Detroit, MI area.

It continues to be a subject of fascination for mafia-interested types. This article is also relevant because the Sheeran story is about to see a film adaptation titled, The Irishman, this fall. Whether Hoffa’s body will ever be found or this story will be ever laid to rest is one for history to decide.