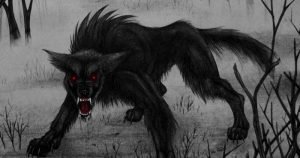 The barghest is a phantom hound that haunts Cornwall and northern England. Black Shuck is a devil dog and is a part of paranormal legend in England, primarily in Norfolk and surrounding parts of East Anglia and Devon.

The Whisht Hounds haunt Whistman’s Woods and its area on Dartmoor, Devon, England. Amy Castile saw a hellhound, as did her mother and psychic investigator, Morely Adams in Suffolk, England.

These spectral animals are supposed to be omens of death. Amy was lucky. It was not her death the hellhound foretold. Phantom black dogs have been associated with the devil. It has been said the he often appears as one. Little known fact, dogs are also associated with witches…

The barghest is seen as a large black dog or a bear. Bears have been extinct in Britain for centuries. Lancashire residents call it Shriker because of the shrieks it emit when unseen and Trash because of splashing noises it sometimes makes when it walks.

Black Shuck is black and about the size of a calf. His eyes glow green, yellow or red and look like fire. He can appear as headless, but, the large eyes still glow in the air.

This nocturnal specter haunts desolate country roads, graveyards, hills and marshes shrouded in mists. In some areas, he haunts straight old roads. His blood chilling howls can be heard above the shrieking wind on stormy nights.

He walks soundlessly, but those who have encountered him can feel his gelid breath on their necks. His paws leave no tracks. While the prevalent belief is that an encounter with Black Shuck means death within a year, people in Suffolk believe he is harmless if he is not bothered. People in parts of Devon believe that it is bad luck to even mention him.

There have been modern sighting of Black Shuck. People who have traveled at night have seen him running along desolate country roads or leaping in front of them across the road.

Could there be more than one of this type of phantom hound?

Whisht Hounds glow and are black and headless. According to legend, they chase the souls of unbaptized children. Another legend is that they are the souls of these children who return to find their parents.

They are most often encountered on Sunday nights. The hounds bay, breathe fire and run across the moors, then vanish into a crag. It is said that anyone foolish enough to chase them will goes over a cliff to certain death.

People who encounter these hounds are said to die within a year, if not on the same night. Those who sight them must lie down immediately, cross their arms and legs and repeat the Lord’s Prayer until they have gone by.

Dogs who hear the Whisht Hounds baying are said to be sure to die.
According to legend, the hounds emerge from the woods every Midsummer Eve, the night of the summer solstice.

There have been documented Whisht Hound sightings since 1677 near Buckfastleigh. According to legend, Sir Richard Cabell was an evil man who was taken to hell the night of his death. His corpse was placed in a pagoda in a churchyard. Anybody foolhardy enough to poke a finger through the keyhole will have it chewed by his ghost.

The hounds have also been seen in a Wild Hunt led by the phantom of Sir Francis Drake at Buckfastleigh Abbey near Yelverton.

These phantom canines have been sighted by many.

One documented case is that of Amy Castile. She lived on the outskirts of Beccles in Suffolk, England. She was 16. During the twilight of the spring evening in 1923, she walked around a bend in the lane leading to her home. She felt intense terror as she looked at the holly hedge that bordered the lane.

She heard the growl, then saw the head of a huge hound is it came out of the hedge. Momentarily, the girl and the dog stared at each other. The dog headed in the direction of Amy’s house 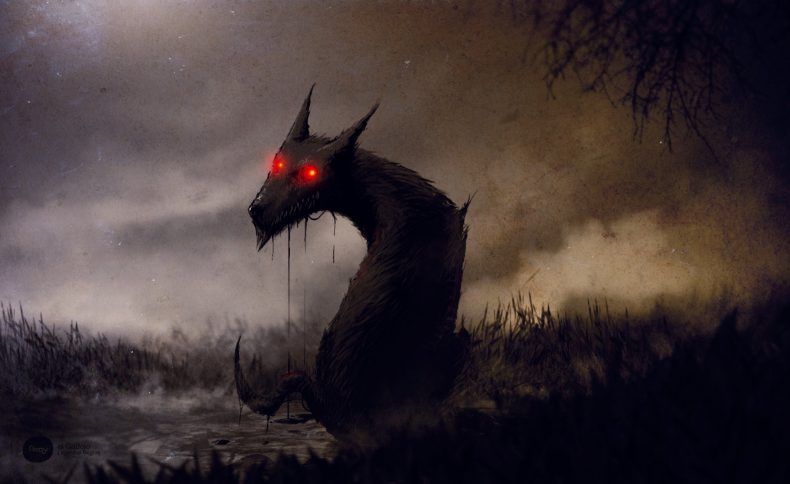 When she arrived home, she was filled with terror as she told her mother, Maude, about seeing the hellhound. The woman told her this was nonsense. Hellhounds did not exist, but Amy persuaded her to go outside and look at the paw prints for herself. This was the third time she had seen the animal. Her mother saw the tracks.

Amy refused to go out of or return to the house after sunset. Maude wanted to convince her that this hellhound business was her imagination and contacted psychic investigator Morley Adams.

He was very interested. Morely had heard about the Hellhound of Beccles, but had not been able to find anyone who had seen it. He made plans to investigate.

Before he arrived, Maude and Amy went shopping. It was growing late when they returned. As they neared the lane, Amy grew agitated and stopped in great fear. She heard the hellhound growl and told her mother that the hound would appear. Maude admonished her. She was being silly. The woman heard nothing.

Amy insisted the dog growled like it did before Mrs. Jones died. She saw the dog only before someone died. Amy stopped again and pointed toward the hedge and said it was there. Maude saw nothing, then grabbed her daughter’s hand. Once she did, she saw the head of a huge hound emerge from the hedge.

The hound stared at them, fangs bared and jaws slavering. The hound went in the direction of their house. As soon as Amy removed her hand from her mother’s, Maude could no longer see the phantom, but Amy could.

The next day, their mailman told them, Mrs. Swift, a neighbor died. Morely arrived the same day.

Morely talked with Amy and Maude. They went to look for its paw prints in the lane, but light rain the previous night had eradicated them.

The investigator asked neighbors about the hellhound and found three men who had seen it. Every time the hound was sighted, someone in the vicinity died the next day. They told no one about the sightings because they did not want to be thought silly or crazy.

Morely wanted to try to see the hellhound for himself. He watched for it for six nights with no results. He was able to persuade Amy to keep watch with him. It could be that the phantom only appeared at specific times or occasions or would only appear to someone who was psychically talented. 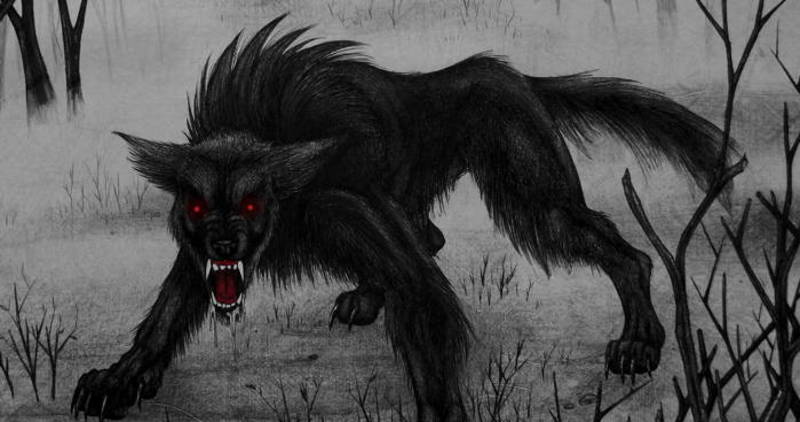 On the second evening, as they kept watch, Amy became agitated and said she heard the growling. He heard nothing. He followed her frightened gaze toward the hedge, then held her hand. Then, he saw the huge hound and saw its bared fangs.

He heard the growling. Phantom and humans stared at each other. The hound approached them, then turned and loped away in the direction of Amy’ house. Morely noticed that the dog was transparent.

When he released Amy’s hand, he could no longer see the hound, but as soon as he held her hand, the hellhound was visible to him.

He examined the ground where the hound had walked and saw paw prints. He took pictures of them. When he developed them that night, he could hardly see them. When he had the pictures enlarged the next day, the prints were visible.

Morely dug in the earth behind the hedge. He found what was left of a Hessian sack with the bones of a very large dog in it. From the way the cord was knotted around the sack, it was apparent to him that the dog had been put in it and buried alive.

He reburied the dog’s remains in another area and kept in touch with Amy and Maude. Amy had not seen the dog for five months, then, the women moved out of the area. No one else saw the Beccles Hellhound again.

Months later, Morely made a very interesting discovery. Mr. Askin and his 6 year old daughter lived in the house 30 years prior to when Amy and Maude lived there. One evening, as the child was going to her piano lesson, a neighbor’s dog mauled her. She died in the hospital.

Askin insisted that the dog be destroyed. The court refused to issue the order. The dog disappeared soon after this. People believed that Askin killed it. No one was that interested in finding the dog, but the police made an attempt. The matter was dropped when no trace of the killer dog was found.