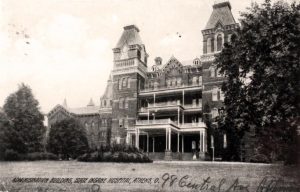 The asylum that doubles as a center for torture; one of those places where the not so insane were admitted as insane; where women angry with their husbands were admitted for “menstrual derangements”; where these patients were tortured with the worst of discredited treatments.

This is the kind of place that exists as a myth we all believe. We’ve heard of them a thousand times, we’ve seen them in movies, but we’ve never really seen one and we have no idea where one might be. Welcome to Athens Lunatic Asylum…

Athens Ohio is a sleepy little community, and home to the phantom of a headless train conductor, the unexplained violent murders and mutilations of livestock, and not to mention pagan cults…but sitting at the heart of it all in a region known as The Ridges is the citadel of creepy locations, the Athens Lunatic Asylum.

Established in 1874 the Athens Lunatic Asylum functioned as a hospital to traumatized Civil War veterans, but was soon expanded to include mentally ill children. Born of the best intentions, the facility took a turn for the worse – possibly when two years after its opening, its services were expanded to include treatment for mentally ill violent criminals.

At that two year mark the Ridges facility changed its name to Athens Asylum for the Insane, but proceeded to undergo seven more name changes over the 117 years it was in operation until finally landing on Athens Lunatic Asylum.

Although the Ridges facility was designed to function under the Kirkbride plan: a renowned system for the development and operation of mental illness centres Athens Lunatic Asylum operated at more than double the recommended capacity for most of its time.

More importantly the Ohio State University archives contain records regarding the employees of Athens Lunatic Asylum’s background training. Some were fully trained and some, not trained at all.

Walk through the halls of Athens Lunatic Asylum and you will be treading the footsteps of men, women, and children admitted for everyday commonplace behaviours that were subsequently tortured, and whom shared their new home with mentally ill violent criminals.

It’s no surprise that Athens Lunatic Asylum is now considered one of Americas top ten paranormal sites. What’s worse is that many of them are still there. Without family or friends to pay for funeral expenses roughly 1,700 of the patients that died on the premises were buried in small unmarked graves behind Athens Lunatic Asylum and the other buildings of The Ridges.

It is also not unusual to find words carved into the walls of the cells by the patients, one in particular amongst the cells in the asylums basement that reads “I was never crazy”. Below the writing a pair of shackles remains bolted to the wall.

Today the main buildings of The Ridges, including Athens Lunatic Asylum have been co-opted into Ohio State University and are referred to as “The Ridges”, but the incidents of violent paranormal activity began even while the asylum was still in operation.

In 1978 a female patient named Margaret Schilling vanished from the care of her nurses and was found dead six weeks later. Although there are many explanations for how and why she vanished, none can explain the state in which her body was found or what it left behind.

On the floor where her corpse was found was a perfect imprint of her, right down to her hair. All attempts at removing the imprint have not been successful and to this day the perfect representation of Margaret can be found in the place where she died.

The building she was found in is the only building that to this day remains completely abandoned and is restricted from access.