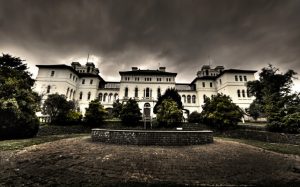 Archaic asylums where patients were tortured, the homes of mass atrocities, and now the homes of deranged poltergeists are not uniquely an America phenomenon.

Some such as those in Australia in fact have histories far exceeding the horrors of Athens Lunatic Asylum. They may have changed its name to Aradale Mental Hospital, and they may have given it a fresh coat of paint, but the spirits within remember the 13,000 patients killed in its walls. Welcome to Ararat Lunatic Asylum…

Built in 1864 while the British still ruled the colonies of Australia, Ararat Lunatic Asylum began as an initiative to cope with the rising number of mentally ill within Victoria.

It’s important to remember that Australia began as a prison colony and that in some regions these policies did not end until the mid-1800s, so it’s quite likely that “lunatic” is interchangeable with “dissident” or other recently freed peoples.

The name itself is even an interesting choice, “Ararat” in the biblical sense is the name of the mountain where Noah’s Ark came to the ground, but it has far reaching occult implications.

Even the CIA had a significant interest in the peak of Mount Ararat, interesting that this would be the original name of arguably the most paranormal location on the continent of Australia.

From the time it was built Ararat Lunatic Asylum was designed to fool the outside world away from the acts being carried out inside the institution. Walls that were trenched on the interior side to provide a twelve foot height, but were level on the exterior side were built around the facility to give the impression that high walls were not in place to imprison its tenants.

At its height, the asylum consisted of 68 buildings and was home to over 2,000 patients and staff, making it a self-sufficient town with little entrance or exit. Even today not much is known about what went on within its walls, just that the corpses kept coming out.

There is however one section known as J Ward that could not be shrouded in secrecy. This is where the most depraved and most dangerous men from all of Australia, and even some sent from England were held.

Housed in the most horrific of conditions under the highest and most brutal of security one would wonder why the tenants of this ward were kept alive in the first place – in respect, it would have been kinder.

All of that would have been bad enough, but then the authority of the region, the Lunacy Department, did the unthinkable and began including children as young as twelve years old amongst J Ward’s population.

Within the walls of J Ward men of pure evil breathed their last breaths and had their bodies buried in unconsecrated ground in unmarked graves only after their final years of torture.

Their fates were shared with the children that occupied the neighbouring cells. It’s as though somebody was intentionally building a magnet for violent poltergeist activity.

During the closed down facility’s refurbishment in 1997 through 2001 there were numerous accounts amongst the workers of objects moving, banging sounds, whispers, and all the other regular poltergeist activity.

However, the effects the buildings have on those inside are far more concerning. Amongst the workers that would often spend more than 10 hours a day inside Aradale, there were an exceptionally high number of violent outbreaks.

Men that had been friends their whole lives in the surrounding community would find themselves inexplicably at each other’s throats while inside the facility.

Today the whole of the facility is maintained as a museum and is available to the public through tours with the exception of 30 hectares in the North Eastern quadrant that were gifted by the state to NMIT to establish the Australian College of Wine campus along with its vineyards and an olive grove. J Ward is included in the wards reserved as a museum.