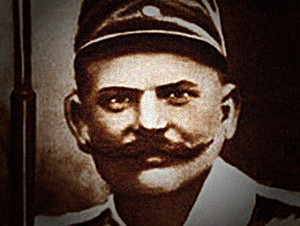 Bela Kiss preyed on lonely women looking for love by placing ads in a Budapest newspaper, his ideal victim being a woman with lots of money and few personal connections. After murdering the women, he preserved the bodies in barrels that his landlord believed stored gasoline. There was only one male victim — a young artist with whom his wife had an affair.

In 1932, an excited New York City detective named Henry Oswald said he was certain he had spotted one of the world’s most wanted men strolling out of the subway at Times Square. Oswald tried to follow, but the man quickly vanished into the crowd.

The detective was certain it was Bela Kiss, Hungary’s prince of love ’em and bleed ’em.

At that time, Kiss had been eluding justice for more than 15 years. He had killed at least 23 women and one man, preying on lonely women looking for love in the want ads.

Lovelorn men and women have always been an easy target for serial killers. France had Henri Landru, a contemporary of Kiss, who romanced war widows, taking their money and their lives, and then reducing their bodies to cinders in his furnace. Along with fire, acid baths and cannibalism have been among the favorite methods these serial killers use to cover up their horrible deeds.

Kiss had a singular technique for ridding himself of all those inconvenient corpses. He pickled them.

In 1914, Kiss, then 37, marched off to fight in World War I. He left his home — a cottage he rented for more than 15 years in Cinkota, near Budapest — in the care of an elderly housekeeper. Then he disappeared into the chaos that was Europe in those years.

He had lived in the town since around 1900, but no one knew much about him. Tall, blond, and handsome, Kiss had a prosperous tinsmith business, and was known as a bon vivant who loved to throw parties. Cinkota’s most eligible bachelor, or so many ladies thought.

His first attempt at wedded bliss had ended in disaster a year after the 1912 wedding. His wife, Marie, was 15 years younger than her husband. Her eye strayed to a suitor closer to her age, a handsome artist, Paul Bikari.

The pair disappeared shortly after the start of their affair. Kiss told anyone who asked that his wife and her paramour had run off to America to start a new life. Soon, Kiss was seen squiring around a collection of lovelies, some young, others elegant women of a certain age. Most came from Budapest. None stayed for long.

In July 1916, two years after Kiss headed to the battlefield, his landlord figured that the reports of his tenant being dead were probably true. It was time to clean up the house for a new occupant.

The landlord started with seven large metal barrels that had been left in the yard. Rumor had it that Kiss had been storing liquor, but he had insisted that he was stockpiling gasoline in anticipation of a fuel shortage.

No one ever asked him to open the barrels to prove what was in them. With Kiss gone, the landlord decided to look inside. He poked a little hole in one of the barrels and was overwhelmed by the scent of death.

When the police came and opened them all, they found, inside each, a woman’s body preserved in wood alcohol. Eventually, there were a total of 24 barrels recovered, each holding a pickled corpse. Many were naked women with ropes around their necks. Puncture wounds in some of the victims’ necks suggested that they had been drained of blood, earning Kiss the sobriquet of Vampire of Cinkota.

There was only one male victim, Bikari, the young artist who had won the heart of the killer’s wife. Marie Kiss met the same fate as her lover, turning up in a different barrel.

A thorough search of the house found little until police opened a locked door to a secret room that no one, not even the housekeeper, had ever entered. It held meticulously maintained files filled with correspondence from women who had answered ads that Kiss, using the alias of Hofmann, had placed in a Budapest newspaper. They read, “lonely widower seeking female companionship.” About 175 women sent proposals.

Kiss had apparently been at it for years, with the earliest letters dating back to 1903. His ideal victim was a woman with lots of money and few personal connections. Sweet talk persuaded them to turn over their savings. One of his victims, Katherine Varga, a widow living in Budapest, had sold her dressmaking business and was last seen heading off to Cinkota with a handsome stranger.

Another victim was Margaret Toth, who was killed in 1906, but not before Kiss forced her to write a bogus letter stating she was heading for America. Other women brought forth lawsuits, but the legal matters were never resolved because the women disappeared. They were among the dead.

The last people from Cinkota had heard of Kiss, he had been fighting in the Carpathian Mountains. Some reports had him falling in battle or dying of typhoid in a Serbian hospital. Budapest police investigated but they discovered that Kiss had given them the slip by exchanging identities with a dead man.

For years, there were sightings of men fitting the fugitive’s description — a soldier in the French Foreign Legion, a thief in Romania, a businessman in Budapest — but nothing of these tips ever panned out.

Oswald’s report was one of the last, with another following in 1936, when someone thought he saw the killer working as a janitor in New York City. Kiss became a phantom, then a legend. Today he is memorialized as many bloody monsters are in slasher movies and heavy metal music.