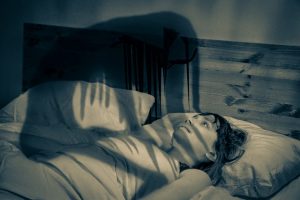 If you’ve ever experienced sleep paralysis, you know just how frightening it can be. For those of you who have never experienced it, imagine that you’re asleep and you’re having a nightmare.

In your nightmare, you find that you can’t move – your body is frozen, paralyzed, and you’re completely helpless.

Now imagine waking up to find that this is not totally a dream– you lie there in bed, helpless and immobile, not only unable to move but unable to cry out. It used to be known as “Old Hag Syndrome” because it was once believed that when you experienced this, your body was being held down by the presence of an evil witch or spirit.

The scientific community calls this “sleep paralysis”, but some people of a more spiritual nature wonder if there aren’t other forces at play.

Scientists describe sleep paralysis as a temporary paralysis brought on by muscle atonia (weakness). In the transitional stages between being asleep and being awake, your mind essentially wakes up faster than your body.

It’s often linked to hallucinations or visions of spirits or unseen intruders in the room holding you down. The belief is that the paralysis sparks the imagination in a half dreaming/half waking state and causes a panic.

While men of science have their explanation, men of faith offer an alternative. Spiritual people don’t believe the visions commonly associated with sleep paralysis are false; they believe that sleep paralysis is in fact something brought on by an encounter with some kind of entity.

This entity is seen as some kind of malevolent force. Some will say it’s the spirit of evil witches, others put the blame on demons or shadow people. No one is really sure what this entity is or what it wants, but it’s generally described as a dark figure.

If this is a normal human experience, it should come as no surprise to anyone that sleep paralysis is a universal occurrence– people have experienced it through the ages, world-wide. What’s interesting is that in every culture, it’s been associated with some frightening or malevolent spirit.

This agreement is so interesting because it is so unusual; rarely is human kind in agreement on anything. Some people believe magic is good, others believe it is evil. Some see spirits as something to honor, others see them as something to fear. Rarely do human beings across the globe throughout history interpret an experience the same way.

Does one explanation rule out the other?

The big question that these types of experiences always seems to come down to is this: which is right? Which explanation wins out? Is it science, or is it spiritual? The question I’d like to pose is, why does it have to be only one or the other? Why can’t it be both?

There’s no reason to deny scientific facts and findings on things—we can accept the explanation of muscle atonia for our inability to move when sleep paralysis sets in. But just because there is no physical, measurable evidence of supernatural causes doesn’t mean they don’t exist. As the phrase goes, absence of evidence is not evidence of absence.

For all of our physical world that science can prove, they’ve just not been quite as enterprising when it comes to finding evidence for the spiritual. Of course, the spiritual world is harder to prove by the means we have at our disposal now, and that may change one day when scientists become more open minded about pursuing the non-physical realms.

But that doesn’t mean these realms don’t exist—and too many people have had experiences with the spiritual to dismiss the possibility out of hand.

Perhaps there are negative or malevolent entities out there, lurking, causing conditions like sleep paralysis. Only when we begin to accept the possibility will we truly begin to find answers to such issues.

Some Pre- and Post-OBE Phenomena