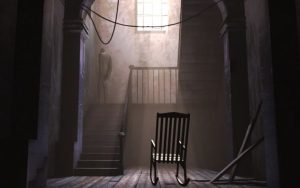 While the famous Ghost Tours in Key West, FL, are enough to scare some tourists, others like to test their luck further by staying in one of the city’s haunted hotels.

Every night in Key West, tourists follow guides down dark alleys to hear stories about the city’s ghosts, pirate lore, black magic rituals, and voodoo superstitions. By the time the tours are over, visitors can be shocked to find that the hotel or guesthouse they’re about to spend the night in was scary enough to feature in the ghost tour.

Some hotels, B&Bs and guesthouses are said to have special guests who loved Key West so much that they refused to leave, even after death. This guide takes a look at some of the most famous haunted places to stay in Key West.

The Artist House, Robert the Doll and the Ghostly Woman in White

One of the most spine chilling stories on the Key West Ghost Tours is that of Robert the Doll. Robert first started scaring the locals when he reportedly terrorized young children in the house at 534 Eaton Street, Key West. A popular stop on the Ghost Tours, the home is now a B&B called The Artist House.

While Robert the Doll now resides in Key West’s East Martello Museum, it is said that a ghost can still be found at his old address. It’s believed the spirit of former resident Anne Otto is trapped in the Victorian home, and some guests say they have seen her walking down the staircase in her wedding dress.

The Artist House is not the only place to stay in Key West where a ghostly bride is said to walk the halls late at night. Over at Marerro’s Guest Mansion, owners invite visitors to “meet the original spirit of Key West”.

The Victorian Mansion was built in 1889 by prominent cigar maker, Francisco Marrero, in an attempt to convince his young love to move to the island. Some believe that he was so successful that his bride moved to Key West, and has stayed around to this day.

Enriquetta Marrero and her eight children were thrown out of the home in 1891. According to The Ghosts of Key West by David L. Sloan, as she was evicted, she told the gathered crowd that the house was rightfully hers, and that “with God as my witness, I will always remain here in spirit.”

The Old Town Manor and the Ghost of Eaton Lodge

Built in 1886, Eaton Lodge was once home to Key West’s only surgeon, Dr Warren. As well as live in the Lodge, Dr Warren also performed procedures on the premises, and it’s said that he would pace the halls worrying about his patients.

Anomalien.com has been told that in November 2009, one guest reported that after kicking off the sheets because he felt warm, 30 seconds later the sheet was firmly put back onto his foot. When he turned to see why his wife had done it, he found she was fast asleep.

A week later, another guest was woken by a woman at the end of the bed in a white gown. Thinking it was her roommate, she shone her cell phone in the woman’s direction, only to find there was no one there, and her friend was asleep.

The Banyan Resort, Key West, and the Ghost of Captain Cosgrove

With its large Banyan tree roots twisting around the guesthouses, The Banyan Resort at 323 Whitehead Street, Key West, looks so spooky it is a popular place for tourists to take photos.

It has also earned a spot on the popular Ghost Tours thanks to reports that the spirit of one of the former owners haunts the resort.

Captain Phillip L. Cosgrove bought the Cosgrove House in 1871. Despite the renovations, it’s said Mr Cosgrove still considers the house his home, and haunts his former residence and the gardens.

The Crown Plaza is the starting point for Key West’s Original Ghost Tours, and home to the haunted gift shop. It is also said to be a hotspot for paranormal activity in its own right.

Originally known as La Concha, the hotel has been home to guests such as Ernest Hemingway and Tennessee Williams. It is also said to be home to some unknown guests who stayed on past their check out date.

While some people may not like the idea of spending the night in a place that is said to be haunted, there are those who relish the chance to add an extra layer to their Key West experience. It’s up to the individual to decide if they would rather stay in or avoid a room where things could go bump in the night.