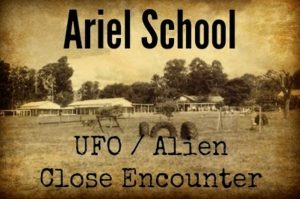 On Friday 16 September, 1994, at approximately 10:15, 62 children from Ariel School, a private primary school in Ruwa (about 20 km from Harare), had been inside their playing field for the mid-morning break.

Unexpectedly, they saw three silver balls in the sky over the school. These disappeared with a flash of light and then reappeared elsewhere.

This happened 3 times and after that they started to move down towards the school with one of them landing (or hovering) over a section of rough ground made up of trees, thorn bushes, and some brown-grey cut grass with bamboo shoots sticking up out of the ground.

The youngsters aren’t allowed in this area although it is adjacent to their playing field and is not fenced off, because of snakes, crawlers and possibly other dangerous creatures. One can soon disappear from view while walking here, and there is only one very rough track used by tractors in an attempt to clear this area.

There is a line of electricity pylons and according to one boy, the object followed along this line prior to landing. There is also some controversy as to whether the object landed on the ground or hovered above it.

On Tuesday, 20th September, I went out to the school with a BBC reporter and their television equipment, as well as my son and Gunter Hofer, a young man who builds his own electrical equipment, a Geiger counter, a metal detector, and a magnetometer, to try and see if the object left any traces behind.

The headmaster of the school is Mr. Colin Mackie, who was most co-operative, and although he had never been involved with UFOs or a believer in them, said that he believed the children had seen what they said they saw.

I was able to interview about 10 or 12 older children and this was recorded for BBC television.

One eyewitness, Barry D., said he had seen three objects flying over, with flashing red lights. They disappeared, and reappeared almost immediately, but somewhere else. This happened about three times.

Then they came and landed near some gum trees; Barry said the main one (object) was about the size of his thumb nail held at arm’s length.

The reports were similar, although some children were more observant than others.

The consensus of opinion was that an object came down in the area where they indicated, about 100 metres from where they were at the edge of the school playing field. 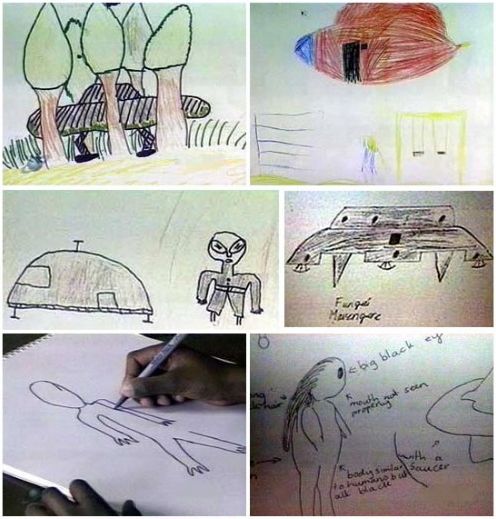 Then a small man (approx 1 metre in height) appeared on top of the object. He walked a little way across the rough ground, became aware of the children and disappeared.

He, or someone very like him, then reappeared at the back of the object.

The object took off very rapidly and disappeared. The little man was dressed in a tight-fitting black suit which was ‘shiny’ according to one observant girl (11 years of age). He had a long scrawny neck and huge eyes like rugby balls. He had a pale face with long black hair coming below his shoulders.

I had suggested to Mr. Mackie prior to visiting the school and before the children had been interviewed, that he let the children draw what they had seen and he now has about 30-40 drawings, some of which are very explicit and clear, although some are rather vague.

The childrens’ ages vary from 5/6 to 12 years. I have 22 photocopies of the clearer drawings as Mr. Mackie kindly allowed me to page through the pictures and choose those I wanted.

Most of the descriptions are similar but some of the craft are very obviously ‘flying saucers’, and I wonder how many of these children have had access to the media. Others are crude but more or less in this saucer shape.

The children vary in cultures: there are black, white, coloured and Asian children. One little girl said to me, ‘I swear by every hair on my head and the whole Bible that I am telling the truth.’

I could see the pleasure on her face when I told her that I believed her. The smaller children from 5-7 years were very frightened at the time and ran shouting ‘Help me, help me.’

When the older children asked why they were saying this, the reply was, ‘He is coming to eat us.’ I should think this applied more to the black African children who have legends of tokoloshies eating children.

Their teachers were in a meeting and did not come out. When I queried the headmaster about this he said the children always shouted and yelled during their playtime and no one thought there was anything unusual going on. The only other adult available at the time was one of the mothers who was running the tuckshop.

When the children came to call her, she did not believe them and would not come out: she was not prepared to leave the tuckshop with all the food and money.

Gunter and the men thoroughly examined the ground around where the children had seen the object, but could get no reaction on the geiger counter or any other equipment. If the object was hovering perhaps nothing would show.

I walked, on my own, along the electricity pylons for quite a away, caught up in thorn bushes, trampling blithely over snake holes and discarding all caution. I found no place where some object could have landed and pressed down the foliage. In fact, I should think the bamboo stumps would have been a deterrent. The day was hot, around 33 C (91F)…

Dr John Mack was visiting Zimbabwe at the time of the event, and he spent two days at Ariel School with the children. He also spoke to the Headmaster, Colin Mackie, the teachers and some of the parents. John and his fellow researcher, Dominique Callimanopulos, were able to get through to the parents and teachers and convince them that even if they did not believe the children, it was counter-productive to accuse them of lying.

Listen and think about what they were saying, he advised.

His particular interest in child psychiatry was also of great use during the questioning and many former hidden memories came to light, something John is sure to make public when he has had a chance to reassess his interviewing.