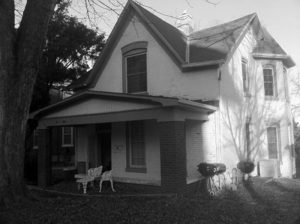 Sallie House is a painted over brick home located at 508 North 2nd Street in Atchison, Kansas. It is said to be one of the most haunted homes in the United States. Sallie House looks very normal from the outside, inside the home however is a far different story.

Sallie House was built over the years from 1867 until its completion in 1871. The original owner of Sallie House was reportedly a prominent local physician who used the house as both a home for his family and his medical office.

The good doctor had his practice on the lower floor of the home while the living quarters were located on the 2nd floor. The source of the haunting of the home, or at least one of the sources, is believed to be from one of the doctors very unfortunate patients, a little girl named Sallie. There are two versions of what happened to Sallie. The first says that Sallie suffered from influenza and the second that she came to the doctor with an appendicitis. Which ever story may be correct the result was the same, Sallie died in the home.

Many families have lived in Sallie House over the years and have reported paranormal activity. It was however a young couple, Debra and Tony Pickman that may have had the most dramatic and malevolent paranormal encounters in the home.

While the ghost of Sallie is certainly in the home, many think that she is not the only entity to be found at Sallie House. Sallie seems to be a harmless if somewhat mischievous spirit. She may be the one responsible for such phenomena as pictures being turned upside down on the walls as has been reported to have occurred. There is also believed to be an entity with an evil, even demonic nature in Sallie House. It is this being that seems to have been responsible for the various physical attacks on Tony Pickman.

The evil entity of the home is believed to be the ghost of a woman approximately 30 years old. Who she was remains a mystery as does the reason for the assaults on Tony. The attacks mostly manifested with scratches, deep bloody scratches on Tony’s arms, back and stomach.

The phenomenon was shown on the show “sightings” when they were at Sallie House to investigate the case. Some of Tony’s other bizarre encounters in the home include a dream where Tony was being pulled out of bed by the wrist, only to find when he woke that he had burn marks on his wrist that looked like they had come from a human hand. On another occasion Tony was taking a nap when he woke to the words “Here’s your remote,” he opened his eyes to see the TV remote being placed on his chest by unseen hands.

Debra and Tony Pickman lived in Sallie House for only 22 months before reaching the point where they simply could not live with the paranormal activity in the home. While there were many people who died in Sallie House over the years, there is no historical record of a young girl named Sallie passing away in the home.