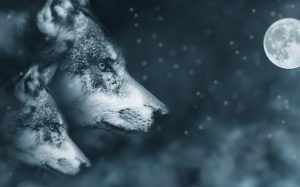 According to fairy tales, wolves are “bad.” Reality dictates otherwise. There are cases, including this one, where these canines have saved people’s lives.

Wolves of fiction have a bad reputation, as evidenced by Little Red Riding Hood, the Three Little Pigs and others. In reality, a study of wolf attacks indicates that these are rare. In the past fifty years, about seventeen people in Europe and Russia were killed by wolves.

There were no fatalities in the Americas. The majority of these attacks were by rabid wolves. The other attacks were either because the animals were in fear of their lives or when they regarded humans, especially children and babies, as prey.

In reality, wolves are shy and avoid humans. Shamanic people hold the wolf in high esteem. He is a teacher and pathfinder and represents loyalty, intuition and the shadow.

Trapped in the Blizzard

Carter Allen and his girlfriend, Dawn, were out late one night when it began to snow. Soon, the flurries turned into heavy snow, so they decided to go to his mother’s house in rural Minnesota. The snow became a blizzard.

The car slid into a ditch from which there was no escape. Their only chance was to walk to try to find safe haven. They were wearing sneakers, jeans, sweaters and jackets which offered no protection from the cold, wind and blinding snowflakes.

Carter led Dawn back to the car, then went to seek shelter. He found a farmhouse. The elderly farmer refused to help. Carter trudged back to the car.

The Shadow During the Snowstorm

Carter, exhausted and numb from the cold, at some level of consciousness, was aware of something following him, but was too worn to look. As he felt himself falling down and into darkness, he remembered praying for help.

He struggled to regain consciousness and felt something furry covering him like a blanket. When his mind was clearer, he realized it was a large black canine. He petted the animal and wondered if it was a wild dog.

No one would allow such a magnificent pet out in this weather. He had never seen such a splendid animal or this breed of dog. Carter looked into the animal’s eyes and saw the canine wanted to help him and the canine seemed to sense why their paths had crossed. Carter pressed his face into the animal’s fur and breathed in warmed air.

The man was energized and made his way back to the car, expecting his rescuer to follow him, but the animal disappeared into the darkness. Carter and Dawn huddled together in the car. He told her about the dog who saved him which made him feel warm and helped her to relax.

The couple was wakened by a snowplow driver who offered to take them to Mrs. Allen’s house. Carter told his mother about the dog who saved him.

His mother said there was no such dog in the area, but, twice, she had seen a large black wolf in the vicinity where Carter fell.

There is documentation in parapsychology labs and in the field that some animals have psychic ability. The wolf saved Carter’s life and, from his gaze, conveyed the fact that he was there to help.

Were Mrs. Allen’s sightings of the wolf the animal’s precognition, knowledge of the future, that he would be there to help when needed? Anpsi, animal psychic phenomena, is one of the mysteries that traditional science has yet to find answers to.