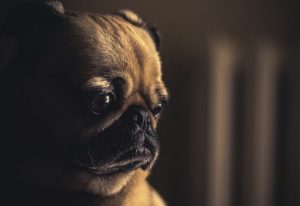 Dogs show psychic abilities in several ways. One of these is knowing when a loved one is in danger or dying. They have also shown signs of mourning.

Stories Of Dogs Who Have Sensed Death and Grieved

Many people know about King Tut’s curse and some might also know that the night Lord Carnarvon died in Egypt, his dog in London howled, then fell down, dead, in the early morning hours as its loved one was dying.

Napoleon Bonaparte had an experience that he wrote about after a horrendous battle. A dog came out from under a corpse’s greatcoat and ran toward him and his men. Then, the dog ran back to his master, yelping in grief. The dog licked the man’s face and dashed toward the men again.

Napoleon wrote that he was deeply impressed. He thought about the slain soldier and that he might have human friends, but the only one who stayed by the man was his dog. Bonaparte wrote that he had watched executions and was not emotionally affected by them. He wrote he actually cried as he watched the dog.

King was a German shepherd whose owner died in 1975. The family owned a small store and lived above it. As the grandfather was dying, he stayed in a room behind the store, out of the dog’s sight. King grew quieter and more grief-stricken as his friend’s physical life was ending. When the man died, the dog let out mournful howls and whines and scratched the floor.

On the day of the funeral, the dog escaped from the house. The family searched for him for three weeks, then someone thought they should look in the cemetery. They asked the groundskeeper if he had seen a German shepherd. He had. Daily, at 2 PM, the dog visited the grave and whined and howled. If someone tried to get near him, King would growl with menace.

John Gray died in 1858 and was interred in Greyfriars Kirkyard. His grave had no tombstone and it was barely discernible. His Skye Terrier, Bobby, kept vigil at the grave for fourteen years until he died in 1872.

Greyfriar’s Bobby left the grave only to eat. People would gather at the Kirkyard entrance to see the little dog come out for his dinner when the 1 PM gun sounded. Bobby would go to the coffee house where he had gone with his dead master accompanied by William Dow, a cabinet maker. He was given his dinner there.

The groundskeeper of the Kirkyard had provided shelter at the foot of Gray’s grave for him. In 1867, a law was enacted that all city dogs be licensed or destroyed. The Lord Provost paid for the license and got Bobby a collar.

A monument to Bobby has been built in the across from the Edinburgh Kirkyard honoring his devotion to Gray with a statue of a Skye Terrier on top.

Parapsychologists and skeptics have wondered how animals know when the death of a loved one is approaching? Could it be telepathic communication? There has been laboratory research to support this as well as documented cases.

Could it be that death has an odor that animals who have a keen sense of smell and discern odors humans can’t? This is one of the theories to try to explain why dogs can sense seizures and cancer. Can they hear or see things we can’t?

Until parapsychologists, biologists, veterinarians and others can answer these questions by the scientific method, there are only theories and beliefs.