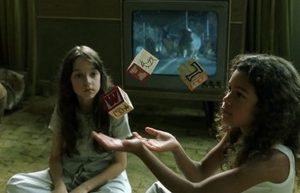 Young children are innocent beings, and no stage of their childhood is more charmingly innocent than those years between their first words and kindergarten. They are just starting to understand cause and effect, they haven’t learned how to lie, and they are open to their world and their experiences at a level that we never touch again as we grow older. This openness is the focus of my column today.

We are all born with the ability to detect a spirit. It is only as we grow older that the stigma against taking on the unknown touches us, as do the distractions of the physical world. We close ourselves off as we grow older, creating limits to what we perceive as possible.

We box ourselves into the rules that define an acceptable reality, not wishing to appear crazy, flaky, or dishonest. However, there is a seemingly magical age in which none of those things matter, and we do not question the unexplained because we take it all in without questioning.

My sister has two children with another one on the way. She also lives in a house that with a history of ghostly activity. She doesn’t like to talk about it because she herself is frightened of it, and because nothing has been overtly threatening, I believe she feels her fears are something others might ridicule.

After all, our family are no strangers to the unexplained, and we have several sensitives in our little clan that could probably take their abilities on the road. In her case, I don’t think it’s the fear that no one will believe her as much as the fear of having anyone tell her that it’s nothing to be afraid of.

Her first child was born with a caul over his face. Whether or not that is an indicator of strong psychic ability is not something I am going to get into, other than to say that as he’s grown older (he’s almost three at the time of this writing), he has been most affected by the goings on in her house.

He and his little sister, born ten months later (yeah, I know, my sister is a machine), have been tickled by unseen hands, have told of speaking to a man, and have been awakened in the night by someone wanting to play with them. Now that they are talking more coherently, they are relating these experiences to my sister, as well as my mother, who lives next door.

Despite my sister’s fears, I feel she is handling the situation in the best way a person can, and this is what I am here to share. If your child sees something, talks to something, or otherwise interacts with something that shouldn’t really be there and is clearly not an imaginary friend, nurture the openness. Telling a child that it cannot possibly be there confuses them and encourages them to be dishonest. As they get older, you may want to tell them that talking to people outside the family about it is probably not the best idea, but try to do so without making them feel as though it is something to be ashamed of.

If a child has a strong psychic sense, closing them off to it is a huge disservice. Why not nurture the open mind and the insight? They may lose some of that anyway as they grow older, but to encourage closing them off from something potentially beautiful and creating fear, in my opinion, is not the way to go. Even and especially if what they see frightens them, get them to talk about it, reassure them, and allow them to one day appreciate their ability.

I believe that we are all born with a stronger ability to “see” that has the potential to get lost as we grow older. Why encourage a child to lose such an important gift that in later years, might provide vast insight and enlightenment?

Have Scientists Discovered a Way of Peering Into the Future?