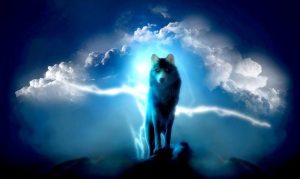 My family owns a plantation down in Louisiana with lots of sugar cane out in the back. When I was very young, my cousins and I would play hide-and-go-seek in the cane fields. Needless to say, we would end up with more than a few bumps and bruises. My grandpa, becoming tired of playing doctor to our wounds, sat us down one afternoon to tell us a story that he hoped would finally keep us out of trouble.

Do you know why?”

“Of course, grandpa!” answered my cousin, Justin. “Cause there are snakes and mud an’ stuff out there.”

“Well, that too. But I bet you don’t know what else is out there.”

By this time we were all upon the edges of our seats. “The Blue Wolf is out there, too.”

“Oh, get real, gramps!” shouted Jessica, the eldest of my cousins.

“A blue wolf? What is that, like, some kind of ghost?”

“That’s exactly what it is!” exclaimed grandpa, “And I’m about to tell you the story of the first time he came to our plantation.”

“My mother had two children after I was born. Elise and Mary. My father passed away before Mary was ever born. Mary died when she was only a year old. Elise died a few years after. My mother loved all of her children very much. But something drew her to Mary.”

“She thought the world of Mary. Mary was born with the bluest eyes and blondest hair that any child has ever possessed. She had beautiful lips and thick cheeks, and I was proud that she was my little sister. Everyone who saw her fell in love. Well, everyone except for Elise.”

“Elise was five at the time of Mary’s death, and you know how jealous five year olds can be. She couldn’t stand the way everyone treated Mary, especially her mother. She would do anything to get her attention away from Mary, and one summer evening, her plan worked.”

“Mother had taken Mary out for a walk down the long rock path to our home. We lived on this plantation back then. I was out back trying to catch some chickens in the coop. Elise was in the house, taking a nap. When she awoke to find Mary missing, she went into the living room to look for her. Out of the window, she could see Mother holding Mary high in the air, laughing and singing to her in that beautiful voice. Elise became jealous, and ran outside to get Mother.”

“‘Mommy!’ she yelled. ‘Come quick, there’s a snake in the bedroom!’

My mother put Mary down on the steps of the house and told her to stay there until she came back. Mary looked at mother and said, ‘Elise turn!’ in her childish voice. Mother nodded and ran into the bedroom. ‘Where’s the snake, Elise?’ asked my mother. ‘Under the bed,’ replied Elise. My mother motioned for Elise to leave the room, just what she was hoping for.”

“Elise went out to the front porch to find Mary. She was still sitting on the steps, like the good girl she was. Elise ran up to her and grabbed her arm. She drug Mary to one of the nearby cane fields and sat her down right in the middle of it. Elise pulled some rope out of her dress pockets and tied Mary’s little wrists to the biggest piece of cane she could find. Laughing she ran away from Mary, who was crying loudly for Mother. Amidst her crying she yelled, ‘Elise turn!’ Elise ran all the way back to the house to join mother.”

“When my mother found out Mary was missing, she became frantic.

Everyone from town was soon there to help look for the missing child, but she was never found. What was found were the small ropes used by the nameless villain that tied her to the cane and several large paw prints. ‘Probably a wolf,’ a neighbor remarked.

From that night forward, my mother would go out every night to that spot and listen to the sounds of a wolf off in the distance, wondering if that was the one who took her child.”

“A few years later, someone came knocking on the front door.

Elise, now 12, opened the door, only to find no one there. As she was about to close the door, she heard a little laugh in the bushes. She walked out onto the front porch and looked around.

Elise heard the laugh again, this time from the cane fields. She thought someone might be playing a trick on her and decided to find out who it was. She walked out into the fields, following the laugh until she came to a spot she recognized. ‘Mary,’ she thought, and turned to see her sister standing next to a large, blue wolf, stroking his back lovingly.”

“My mother and I were startled by Elise’s screams off in the distance. We ran to see what was happening, but we got there too late. All that was left was a mangled Elise. A few small stones next to her spelled out the words, ‘Elise turn’.”

My cousins and I were so terrified by my grandfather’s story that none of us have gone into the cane fields since. A few claimed to see the blue wolf, a few claimed to see Mary and Elise, finally reconciled. We all, however, have heard his chilling howl, warning us to never disturb his two precious children.