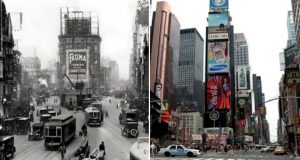 Imagine being able to witness the French Revolution, or being able to walk through a town that hasn’t existed for decades. What would you do? What would you say? Paranormal experts have mentioned that there have been cases where people experienced time slips, or spontaneous time travel that lasts for a short period of time.

Time slips, also known as time travel, are mentioned frequently in literature, most famously in H.G. Wells’ The Time Machine and more recently in Madeleine L’engle’s An Acceptable Time.

“Dr. Who,” a popular British television show, posits its entire plot around the subject, making for interesting and often hilarious viewing. This topic has fascinated science fiction readers, scientists, and those interested in the paranormal for centuries.

A time slip is an occurrence in which a person or people step from their time into another time, either in the past or in the future. This paranormal idea is based on the scientific theory that time is not linear, but rather occurs like water in a lake: rippling around the same point in space.

The person also usually experiences a disquieting, unsettling, or depressing feeling. Some people have even described a sort of fog surrounding them as they emerge into another time.

Time slips have alternatively been posited as “hauntings” in which the person who experiences the time slip is actually encountering ghosts, or a past memory that is strong at that particular place. However, when a person experiences a time slip, their surroundings also change, which seems to contradict the theory that time slips are merely incidences of visiting ghosts.

It would be very easy to simply dismiss time slip cases as complete bunk. After all, there is no explanation in modern physics for the ability to randomly travel into the past. The stories that they tell are so extraordinary, it’s hard to believe that the people who tell them could ever be truthful.

Yet, there is a lot of reason to believe those who report time slips. Many of the people who have experienced time slips accurately describe minor aspects of their experiences that only historians would typically know.

A good example of this would be Annie Moberly and Frances Jourdain, who visited Paris in the very early 1900’s. They felt a distinct change in the atmosphere, then began to see gentlemen in tri-cornered hats strolling the grounds of Paris.

Women in old fashioned (even for the 1900’s) clothing were spotted by the duo, and it became quite clear that they were actually strolling through the 1700’s. This was further cemented when Jourdain revisited Paris a year later, only to find that the scenery in the area that she visited was completely different.

Only after her visit did she learn that one of the women that she saw matched Marie Antoinette’s description perfectly, on the day that she learned about the angry mob that would eventually kill her.

Interestingly enough, there are some examples of time slips which actually have physical evidence. One of these happens to be the case of a Mr. Squirrel. In 1973, the man entered an envelope shop and was served by a woman in Edwardian dress.

He bought a bunch of envelopes, and left the shop. The next day, he returned once more, only to find that the entire shop had changed completely. Upon asking about the strange woman who sold him the envelopes the day before, the elderly woman at the counter was unable to recall anyone of the sort who worked there. He still had the envelopes in hand, and soon discovered that the company that made the envelopes went out of business over a decade ago.

In 1979, two married couples, Geoff and Pauline Simpson and Len and Cynthia Gisby, went for a vacation in Spain. While they were driving through France on their way to Spain, they stopped at a hotel. They stayed at the hotel, had dinner there, and stayed the night. Both couples noted that the hotel was extremely outdated. There bedroom had no window panes, only shutters.

The beds had no pillows, and there were no sheets, only calico fabric. The bill they paid seemed quite low for the time. When they asked for directions to the nearest interstate, the hotel staff seemed to have no idea what they were talking about or what automobiles were. W

hen they later had their vacation pictures developed, the pictures of the hotel were completely missing from the roll. When they returned to vacation at the same hotel, it was nowhere to be found.

In his article, “Time Slip/Travel Paranormal Experience,” Packer describes a time slip that happened to him as a teenager. He was wandering around his aunt and uncle’s motel/restaurant, playing in the woods (which had no buildings–just woods) when he stumbled upon a cabin with several nearly naked African American children running around, overseen by their mother, who was dressed in dated clothing: a turban head wrap and a long dress.

When the author tried to find that cabin again a few days later, he could not. Packer’s sister also told him of a story in which she saw a “banshee” several times after her exhusband’s father’s death.

In other cases, people from the past managed to talk to people in the future via phone conversations. It seriously leads to wonderfully bizarre questions, doesn’t it?

There have also been a great many incidents of time slips on Bold Street in Liverpool. Some people consider Bold Street a time vortex, or a place especially sensitive to fluctuations in time, possibly because of electromagnetic field disturbances.

These spots are known as Devil’s Corners, the most notorious of which being the Bermuda Triangle. An area near Japan, known as the Devil’s Sea, is another. These areas are believed to touch on sensitive areas of the earth’s magnetic field, in which the barriers between different times are reputed to be especially fluid. Many stories have been told of ships mysteriously disappearing in these areas.

Each time travel experience has the same beginning, which lends some credence to the actual experiences that people recall. Initially, the person who experiences a time slip feels like something is wrong. Some people who experience them mention that there is an odd fog in the air shortly before they travel into the past. Others say that they just feel uneasy during the time travel.

The length of a time slip can vary, as does the time that people visit. In some cases, it will be a repeat of the future. In most cases, though, the unwitting person accidentally slips into the past. A time slip can last anywhere from 3 minutes to a full night.

This leads to a variety of different questions that need to be answered. Are we still alive in another dimension? How do time slips happen? Most of the major theories out there suggest that time slips are actually produced by two dimensions sharing the same space. Whatever it may be that causes it, it’s quite clear that time slips are very real.

The Story of Natasha: Terrifying Possessed Doll Of Adolescent Suicide