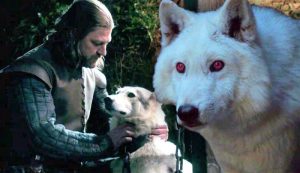 The Dire wolf (Canis dirus​) once actually existed on Earth in real life, not just something from the ” Game of Thrones” TV series and books by George R.R. Martin.

The author might have an epic imagination, but he didn’t completely make up these Game of Thrones creatures, as Dire wolves in fact inhabited the Americas, from 1.8 million years ago to as little as 10,000 years ago.

The large Pleistocene mammals went extinct when the last ice age ended, roughly 10,000 years ago. Large herbivores such as mammoths died out due to climate change, and carnivores such as dire wolves died when their food sources disappeared.

Dire wolves and mammoths were adapted to the ice age climate, their size maximising heat retention and strength but at the cost of speed. In the warmer climate following the ice age, smaller but faster animals thrived that didn’t need to make these trade offs for cold weather.

Not only did dire wolves’ old large prey such as mammoths die out, but they were being out-competed by smaller, faster, and smarter grey wolves. Grey wolves are not descendant from the dire wolf, but both share a common ancestral species.

The Dire Wolf got its name in 1858, four years after the first specimen had been found, and they were about the same size as the largest modern grey wolves (Canis lupus), with its shape and proportions being similar to those of two modern North American wolves, the Yukon wolf and the Northwestern wolf.