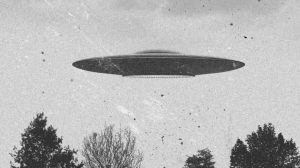 American journalist Annie Jacobsen, in her book AREA 51: An Uncensored History, assumes that the flying saucer, as UFOs were called then, that crashed in Roswell was a Russian spy plane.

The book is said to be based upon interviews with scientists and engineers who worked in the facility. They suggested that Soviet dictator Joseph Stalin asked Nazi doctor Josef Mengele to create “grotesque, child-size aviators” to be remotely controlled, land in the US and cause hysteria like it did in Orson Welles’ 1938 radio Halloween “treat,” a simulated news broadcast, War of the Worlds without commercials. The show about a Martian invasion caused widespread panic for people who missed the disclaimer.

The incident was withheld from the public by the US government and military. Jacobsen writes that the bodies found at the crash site were hideous misshapen children, about twelve-years-old, under five feet tall, with huge heads and abnormally shaped large eyes. Jacobsen said they were child guinea pigs.

Decades later, two Air Force officers involved in the Roswell UFO Incident released secret information about the incident. On the evening of July 8, 1947, Mack Brazel and others heard a loud explosion near his farm close to Roswell, New Mexico. The next morning, Brazel found wreckage of what seemed to be a UFO.

The Roswell Army Air Field, RAAF, base sent two military intelligence officers to investigate. In 1978, Major Jesse Marcel, one of the military officers who conducted the initial investigation, contacted UFOlogist Stan Friedman, to inform him about incident.

Lieutenant Walter Haut, then RAAF Public Information Officer, wrote a notarized affidavit in December 2002 and authorized it for release after his death. After he died, the document was published. He write that he saw the debris and bodies that appeared to be children whose heads were unusually large in the heavily secured Building 84. Was the Roswell UFO a Soviet Spy Plane?

According to Jacobsen’s book, the conspiracy started after the USSR seized the jet-propelled, single winged Horton Ho 229, a fighter plane, said to be the prototype of the B2 stealth bomber, from Germany at the end of the war.

Angel of Death Mengele had experience in brutal experiments involving children in Auschwitz, WWII’s notorious concentration camp. He agreed to create the bizarre child-size aviators in return for a eugenics laboratory.

One of Jacobsen’s sources was, allegedly, an anonymous, retired engineer from the former defense company EG&G that handled the US government’s top secret projects. He claimed he was involved with the Roswell operation in Area 51 in 1978.

The man claimed workers found bodies, similar to each other, by the crashed UFO. Two were, purportedly, “comatose but still alive.”

Chase Brandon, a thirty-year agency veteran, said, “It was not a damn weather balloon…,” referring to the official military statement about the object to counter Haut’s first press release that said “flying saucer” debris was found in the Roswell area.

Brandon said that it was an aircraft that wasn’t from Earth. Using the words “remains” and “cadavers” was precisely what people were discussing. He claimed he saw photos and documents in a special section of CIA headquarters in Langley, Virginia, the Historical Intelligence Collection, that irrefutably proved to him that the crash was that of an alien spacecraft, although he refused to explain what it was.

Hard evidence was extremely difficult to obtain because many of the official documents were edited or revised.

Stanton Friedman has investigated UFOs for over fifty years, searching for scientific proof of their existence. He worked on highly classified projects involving fusion, fission rockets and nuclear aircraft for state-of-the-art technological companies.

In 1958, he became interested in UFOs and began doing research. In 1967, Friedman began giving lectures about extraterrestrial spacecraft, dubbing the cover ups a “cosmic Watergate.”

Thirty years after the Roswell incident, Friedman met with key military personnel who were involved in the investigation. He learned about the debris and bodies that were recovered. He’s convinced that event is a cover up. Nuclear Physicist Says US Government Covered Up UFO Incidents has more detailed information.

A retired US Air Force Colonel, who wants to remain anonymous, revealed top secret information about Dulce, a secret military/alien base complex. He said its official name is Rio Arriba Scientific & Technological Underground Auxiliary and the abbreviated name is Rio Arriba Co; the acronyms, DSD-3 and RIO-AUX.

There are three separate subterranean installations in Dulce, a small Texan town: TA-D1, TA-D2 and TA-D3, near the 1967 Project Gasbuggy site, the first US underground nuclear experiment for stimulating “low-productivity” gas reservoir.

The sites are connected by tunnels. The primary facility is connected to Los Alamos National Laboratories, a leading national security research institution whose major responsibility is ensuring the safety, security and dependability of US nuclear prevention.

Reading about Dulce seems to be more like fiction than fact; however there’s more than one witness and photos to evidence its existence.

Was the Roswell UFO a Soviet Spy Plane?

In 1947, the US and the USSR were engaged in the Cold War. Both governments and their militaries hid projects from the public so it’s possible there was a secret Russian aircraft.

The Soviets launched their first satellite, Sputnik 1, on October 4, 1957, so it seems improbable that they had an advanced remote controlled spy plane in 1947, carrying a crew of eugenically engineered children.