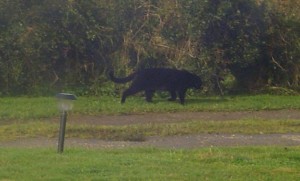 Bodmin Moor is an area of National Park land in Cornwall, southwest England. Since 1983 there have been over sixty sightings of big cats in the area, and some experts suggest there may be a whole breeding population on the moors. In fact, one recent sighting was of a mother cat and her cub together. Despite wide-ranging testimonials from reliable witnesses, a British government report in 1995 concluded that there was no evidence of big cats on the moors.

However, since 1995 some quite startling, tangible evidence has been produced. A 20-second video released in July 1998 clearly shows a large black animal roaming the moor. Experts believe the footage is the best evidence yet to support the idea that big cats are living in the area.

Many also suggest the beasts may be a native species of cat which was thought to have become extinct over a hundred years ago. Around the time of the video release, Maurice Jenkins, a quarry weighbridge worker was driving near Exmoor, near Bodmin, when he spotted an odd beast at the side of the road. He trained his car headlights on the creature. Jenkins said afterwards:

‘It was a big black pussycat. His eyes reflected in my headlights and I slowed down so I could get a better look and it sat watching me. It was the size of a collie dog with jet-black head and tail. He leapt away and made off into the fields.’

Real biological evidence has also been found in recent years. A large skull with huge fangs was found near the River Fowey on Bodmin Moor. The bones were sent to mammal specialists at the British Natural History Museum who, when they examined it, quickly realised that the skull did not belong to a creature normally found in the English countryside. Because of the size and position of the teeth, they also deduced that it was the head of a large cat.

In November 1999 a spate of farm animal mutilations on Bodmin Moor caused a high tech option to be introduced in finding the beast. When a calf and two sheep were attacked and torn apart by an unknown creature, a motion-activated infrared video camera was installed on the moor.

Similarly, in January 2001, reserve volunteers from a nearby Royal Air Force base used state-ofthe- art night-vision military equipment to hunt for the creature. Rather than practice exercises against an imaginary foe, RAF commanders thought that it would be more interesting for the troops to look for the fabled Beast of Bodmin. Whether the RAF found any trace of the Beast is not known.

Certainly, the idea of strange big cats roaming Britain is not totally bizarre. In May 2001, a peculiar, vicious-looking wild animal was found in the garden of a house in Barnet, north London. A huge team of armed police, RSPCA inspectors and vets were needed to capture what turned out to be a lynx.

A similar event happened in September 1998 when people living close by, in Potters Bar and South Mimms, were told to stay indoors whilst police looked for a large cat sighted there. Generally, however, such animals pose little threat to the human population.

Farmers in southwest England do not agree that these creatures are so benign, and many sceptics believe the Beast of Bodmin is, if anything, an escaped foreign cat. A number go missing from zoos and wildlife parks each year, and Britain’s 1976 Dangerous Wild Animals Act made ownership of exotic big cats illegal.

Some people believe that if such a pet were to escape from a private collection, its owner would be hesitant to report it missing. Whatever the truth about its origin, there is growing, indisputable evidence that a large, black, feral cat is stalking the land of Bodmin Moor.