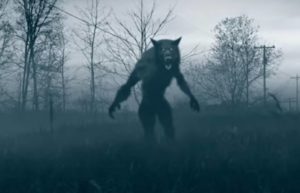 Is there really a Werewolf in southern Wisconsin? It may be hard to believe, but many people over many years have reported seeing a man/wolf creature that is called the Beast of Bray Road or the Bray Road Beast.

While there are Native American accounts of encounters with a creature much like the Bray Road Beast, the first modern report of the beast came in 1936. A man named Mark Schackelman, a night watchman at Saint Coletta Convent, was driving on Highway 18, just east of Jefferson County, Wisconsin.

As Schackelman approached one of the Native American Burial mounds in the area he saw someone or something standing near the mound. As he got closer he could see that this was not human, but he wasn’t sure what it was. The Beast was about 7 feet tall and he estimated it weighed about 500 lbs. The Beast of Bray Road appeared to be digging at the mound. Schackelman soon noticed a strong, repugnant smell which he said was like rotting meat. Schackelman panicked and fled the strange Beast.

Some days later Schackelman got up the nerve to return to the area. As he approached, to his surprise, the Bray Road Beast was still there. This time the man got a very good look at the Beast. It’s face was like a wolf, its hands were human like with what he described as a “twisted thumb”. Schackelman said that the beast made a grunting sound that he described as sounding like “Gadara”. After what he said was a several minute stare down with the Beast, it disappeared into the nearby woods.

There were no additional reports of Bray Road Beast sightings for many years, at least none that became public. Then in 1964, the Beast was seen just two miles from the location of the 1936 sighting. The creature was reported again in 1972 when a woman said the Beast tried to break into her home, before attacking and seriously injuring a horse.

On October 31st, 1989, Doristine Gipson was driving on Bray Road near Devlan, Wisconsin, when she felt a bump. Thinking she may have hit something, she stopped and got out of her car. She saw nothing behind the car, but as she looked around, approximately 50 feet away, Gipson saw a very large bizarre looking creature running straight at her.

She quickly got back into the car and started to drive off, the Beast of Bray Road jumped onto the trunk of the vehicle, but quickly fell off as she sped off. Gipson told a neighbor about what had happened and showed them some deep scratches on her car trunk. From there the rumor of the Bray Road Beast began to spread once again, and more people began to come forward to tell their own strange story’s of encounters with the Beast.

One sighting of the Bray Road Beast in 1989, was reported by 24-year-old Lorraine Endrizzi. Endrizzi said she was driving on Bray Road when she saw something that appeared to be crouching on the side of the road. She slowed her car to get a better look, and what she saw would terrify her.

She said that at one point she was within 6 feet of the Beast. She reported that she saw the Beast for about 45 seconds, and described it as being a large brown/gray hair covered creature. It had large fangs, pointed ears and a face like a wolf. Endrizzi noted that the Beast was built very broad like a bodybuilder and looked very powerful.

Endrizzi escaped in her car and related her story to her family. It was her mother that contacted local reporter Linda Godfrey. Godfrey talked to many people who claim to have seen the Beast of Bray Road. Godfrey would publish the story on December 29th, 1991. She would also go on to write in numerous books about the Beast of Bray Road, assuring the Bray Road Beasts place in the history of the strange monsters that at times, seem to be everywhere.