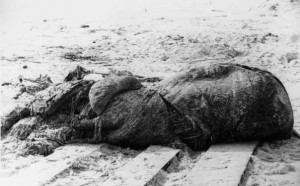 We know more about the surface of the moon than we do about the bottom of our deepest oceans,’ so the old saying goes. It is an adage that, over time, is proving more and more relevant. What creatures actually do lurk at the bottom of the sea?

Around the Bahamas and the southeast American coast there are tales of a giant octopus that captures unwary swimmers and small boats. The people of the islands call it the ‘Lusca’ and believe it lives in deep underwater caves. However, no one has ever seen the creature in it natural environment and lived to tell the tale.

One evening in November 1896 two men were cycling along the coast just outside their hometown of St Augustine, Florida. As they looked over the beach, they noticed a huge carcass. It was 23 feet long, 18 feet wide, four feet high, and it seemed to have multiple legs. The two men decided to tell Dr Dewitt Webb, the founder of the St Augustine Historical Society and Institute of Science, who came to examine the corpse.

Webb photographed the body, noting it was a silvery pink colour, and took samples. Webb recorded that the skin was axe-proof, being three and a half inches thick. He also estimated that the body weighed around six or seven tonnes. It needed four horses and a whole team of people from the local community to drag it the painstaking 40 feet up the beach in order to keep it away from the rolling waves.

Webb was convinced it was not part of a whale, and must have been some kind of unknown giant octopus, so he sent letters describing the carcass to many eminent scientists. One such expert was Professor Verrill at the National Museum (now called the Smithsonian) in Washington DC. Verrill stated that the creature was actually a squid. When Webb sent him more information, he changed his mind and said it was an octopus. Verrill suggested it probably had tentacles around 100 feet long.

Verrill refused to see the dead creature in person, or indeed to provide any funds or resources to help preserve the sea monster. Even so, the professor decided this new species should be named after himself, calling it ‘Octopus Giganteous Verrill’. Finally, he changed his mind again after receiving tissue samples, and said the body was probably just the head of a sperm whale. Webb was disappointed and preserved as many samples of the creature as he could. Eventually the corpse was retaken by the sea.

Over fifty years later, two marine biologists, Dr F.G. Wood and Dr J.F. Gennaro Jr., discovered stories of the St Augustine sea monster in old newspaper clippings. They applied to the Smithsonian and took samples from the original specimens Webb had sent Verrill. Wood had worked in the Bahamas and knew of the famous ‘Lusca’. The legend said that it was a giant octopus, with arms seventy-five feet long, that lived in great deep blue holes in the sea floor. By looking at the samples, Wood and Gennaro were able to deduce that the body was indeed that of an enormous octopus. At long last, Webb had been proved right.

In recent years other examples of huge, previously unknown, sea creatures have been discovered. Tales of giant squid have been told through the ages, but it is only in the last century that accurate and scientific details have been truly kept. Even in this day and age, some bizarre stories still have crop up. French fishermen have recently been attacked by one multi-legged sea creature, and marine biologists are constantly finding remains of squid which out-size the previously known largest.

At the moment, the biggest giant squid find happened in April 2003 when a colossal squid was found in Antarctic waters. The example found was still immature, but had an overall length of around 50 feet. Octopi by comparison, are small fry, and the biggest, caught in March 2002, only measured 13 feet. So the beast at St. Augustine is still a truly unexplained phenomenon.