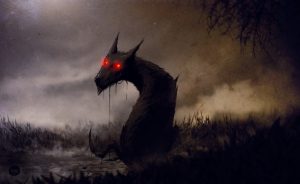 English farmer Ames heard hounds snarling and barking when apples on a certain tree withered before they could be picked. This happened for several days each year.

He had the tree checked by experts and followed their advice. Nothing helped. He never saw the dogs and tried to convince himself that his imagination was working triple time. He only had one dog on the farm.

One day, Ames was talking to his friend Charles, who was distracted because he heard hounds snarling. Ames was relieved that he also heard them. They walked to the tree and saw a misty figure of a man in black and green riding apparel striking out at invisible hounds, as if he was in a struggle to save his life.

The men felt uneasy because they sensed they were seeing a ghostly re-enactment of a tragedy. The scene and the sounds slowly vanished. Ames researched the farm’s history and discovered that a pack of foxhounds were kept there in 1880.

Their master was a huntsman who loved them, treated them kindly and had great rapport with his hounds. When their master was killed in an accident, the dogs bayed mournfully for almost two days.

The farm’s new owner acquired the dogs along with the property. He was a cruel sot who abused everything and everybody when he was drunk. He enjoyed giving the dogs sadistic beatings and fed them sparingly.

He preferred kicking dogs to petting them. One day, the dogs attacked their vicious master under the apple tree and killed him. From then on, its apples withered.

Ames talked to his friend, Lieutenant Colonel Lowe, about the happenings and added it seemed he had ghosts on his farm. Lowe was experienced in paranormal phenomena. He suggested the farmer hire a huntsman to call the dogs away from the tree with his horn while the haunting was active.

Ames asked other farmers if they knew a huntsman who treated his dogs well and had good rapport with them. He was referred to one, Perkins, who was skeptical at first and asked Ames of he was sure he wanted him to call the spectral dogs away from the tree. The farmer assured Perkins he was serious.

The huntsman went to the farm that evening. The foxhounds’ baying began at the usual hour. Perkins was amused and told Ames he wasn’t afraid of ghosts. He suggested that someone had been negligent in securing the foxhounds’’ kennel gates, so they escaped.

Ames said nothing as they walked toward the tree. Perkins remarked about how excited the dogs sounded. He cracked his whip and called the dogs. The men heard the sounds of their paws as they approached, still baying, but they couldn’t see them.

Ames told him to call the dogs. Perkins blew the call to go home on his horn. Suddenly, the noises stopped. The phantom dogs never returned.

In the English moors, there have been sightings of Alien Big Cats, ABCs, and spectral hounds, but few of these cryptids have been photographed. The Beast of Dartmoor was photographed by falconer Martin Whitley.

It’s an animal with powerful large front legs, rounded ears, a long tail and a thick bushy coat that was walking near Hound Tor in the moor. The animal was oblivious to the noisy group of school children yards away. Lucinda Reid saw the pictures and believes the beast is her pet Newfoundland dog because, from a distance, the huge canine looks like a mysterious beast.

Sightings of big cats in Britain started in the 1970s. The British Big Cat Society, BBCS, reported that numbers of the big cats in the country is increasing. There were 2,123 sightings in Great Britain between April 2004 and July 2005.

Most of the sightings were in Devon, Cornwall and Somerset; some, in Scotland and Wales. Black panthers were the most often seen, followed by brown or tawny pumas and lynxes. Some people said they saw two cats, a panther and a puma, roaming the fields together.

The Beast of Exmoor, stalked the fields of Devonshire England killing livestock in 1983, and killed over 100 sheep. Sightings of the animal go back to the early 1970s when people in Devonshire reported it. Those who saw it believed it was a black panther, which is not native to England. It was photographed, but not killed or caught.

The London Daily Express offered a reward for killing or capturing the beast. Riflemen were sent to the area to try to kill the animal. The attacks stopped while they there. Some of the soldiers saw the beast, but none could shoot it. After the troops left, the attacks started again.

In February 1885, inexplicable footprints were found in an English snow. The villagers called them the devil’s footprints. What caused the Devon prints is still an enigma. The footprints ranged 100 miles from Exmouth to Teignmouth. Many years later, strange footprints in the snow were found in Woolsery garden Powler’s Piece forest.

The Yorkshire phantom hounds and their cruel master are gone; however, these and other enigmas exist….