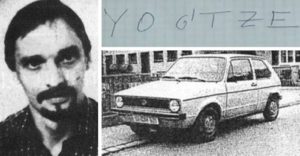 In 1984, Günther Stoll, an unemployed food engineer from Anzhausen prior to his death, occasionally spoke to his wife of “them,” unknown people who supposedly intended to harm him.

He then wrote the six letters “YOG’TZE” (it is not conclusive if the third letter was intended to represent a ‘6’ or a ‘G’) on a sheet of paper before instantly crossing them out.

Shortly thereafter, Stoll went to his favorite pub in Wilnsdorf, where he ordered a beer and fell on the ground, injuring his face. Witnesses stated that he was not under the influence of alcohol and that he suddenly lost consciousness.

He awoke and drove away in his VW Golf I. He did seem to be distressed or anxious about something. Stoll left the pub without confirming that conclusion.

There, he talked to a woman he knew from his childhood and mentioned a “horrible incident.” Since it was so late at night, the woman advised him to go to his parents’ place, and talk to them instead. He then left.

Two hours later, those words became eerily true. At about 3 am, a pair of truck drivers found a badly damaged Volkswagen car in a ditch somewhere along the Autobahn A45. One driver headed for the closest roadside emergency telephone, while the other conducted a cursory examination of the car.

Both truck drivers testified to having seen an injured person in a white jacket walking near the car. After calling law enforcement, the drivers found the severely injured Günther Stoll naked in his car.

He was conscious and mentioned four male persons who had been with him in the car, and had run away. When asked if the men were his friends, Stoll denied it. He died on the way to hospital.

The criminal investigation showed that Stoll was injured before the crash, and must have been hit by a car elsewhere, and subsequently positioned in the passenger’s seat of his car and driven to the location where he was discovered.

It was also concluded that he was naked at the time he was run over. Other drivers reported seeing a hitchhiker at the Hagen-Süd exit. Neither the hitchhiker nor the person in the white jacket were identified.

A more likely explanation was that the note did not say YOGTZE but was a license plate number. The letter O might have been the number 0, the number 2 may have been misidentified as a letter Z and 6 could have been mistaken for a G. The obvious problem with this proposal is that this happened hours before Stoll was fatally injured.

Reportedly, the incident’s case file continues to raise questions within the German government, and they’re still searching for answers today.