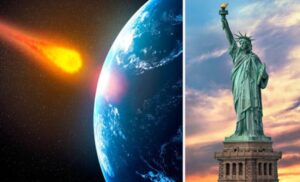 An asteroid about the size of two Statues of Liberty is approaching Earth. The object, named 441987 (2010 NY65), will be as close as possible to our planet on June 25, according to the Daily Express with reference to NASA.

The length of the cosmic body is 187 meters, which, as indicated in the material, is twice the size of the New York Statue of Liberty. The asteroid is moving at a speed of 13.4 km / s.

It is noted that at the point nearest to the planet Earth, the object will be located at a distance of more than 15 times the distance from the Earth to the Moon. Nonetheless, it is still close enough to be considered a Near Earth Object (NEO).

NASA said on its Jet Propulsion Laboratory (JPL) website: “NEOs are comets and asteroids that have been nudged by the gravitational attraction of nearby planets into orbits that allow them to enter the Earth’s neighbourhood.

“The scientific interest in comets and asteroids is due largely to their status as the relatively unchanged remnant debris from the solar system formation process some 4.6 billion years ago.

“The giant outer planets (Jupiter, Saturn, Uranus, and Neptune) formed from an agglomeration of billions of comets and the left over bits and pieces from this formation process are the comets we see today.

“Likewise, today’s asteroids are the bits and pieces left over from the initial agglomeration of the inner planets that include Mercury, Venus, Earth, and Mars.”

However, the asteroid has also been dubbed as being a potentially hazardous asteroid (PHA).

The term ‘potentially hazardous’ does not mean that an asteroid poses an imminent threat to Earth.

Rather, it refers to the sentiment that somewhere down the line in the solar system’s future, an asteroid could collide with Earth.

There are several unknown factors which could influence the future path of the asteroid, including the gravitational pull of other celestial bodies in the solar system.

Biggest ever explosion in the Universe created hole in space