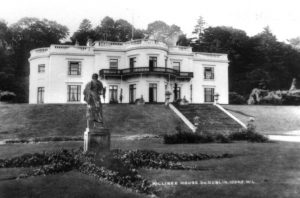 In 1968, Margaret and Nicholas O’Brien bought Dower House on Killakee Road, Rathfarnham, County Dublin, Ireland, a dilapidated building that they planned to renovate and turn into an arts center.

Some of the workers lived on the property during the remodeling and grew used to ghostly sounds and eerie occurrences. One day, a large black cat appeared, then suddenly vanished. The workmen were unsettled.

Although there was a legend about the phantom cat, Margaret attributed the men’s stories to their imaginations. When she finally saw the creature, she became a believer.

The first time the woman saw the black feline that she claimed was the size of a Dalmatian, it was sitting on the hallway flagstone floor, glaring at her. Every door in the house had been locked prior to and after the phantom announced its presence and suddenly vanished.

Portrait of the Killakee Cat

In March, artist Tom McAssey and two other men were working in a room when the temperature dropped drastically. Suddenly the door swung open and a hazy form came into view.

Thinking it was someone playing a joke, McAssey called for it to enter. He told the intruder he could see it. The three men momentarily froze in horror when the response was a menacing snarl.

Then, they saw the figure of a growling black feline with eyes glowing red. Seconds later they ran from the room in fright. 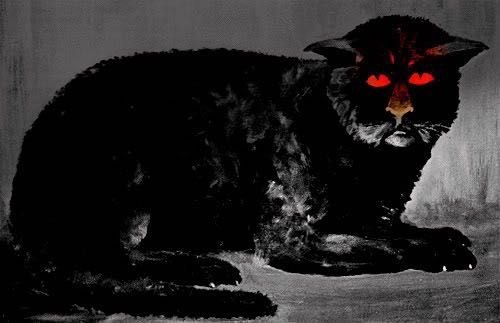 The artist painted a picture of the cat. While the face appears to be humanoid and eerie, it could be the way the features actually appeared, what McAssey thought he saw or a stylized version of the head.

In the mid 1700s, Richard Parsons established a satanic branch of the English-based Hellfire Club in Ireland. Occasionally, they held their rituals in Dower House.

Sources disagree as to the name of one of the members who took part in the demented behavior. Some state it was Richard “Burnchapel” Whaley; the others, Thomas “Black” Whaley.

It has been said that, according to legends or facts, the group’s debaucheries included:

– Devil worship
– Ritualistic killing at least one black cat
– Worshipping cats as Satan
– Whaley set a woman trapped in a barrel on fire
– A deformed male was beaten to death by Whaley and his cohorts for amusement
– Whaley was enraged that a servant spilled a drink on him. Allegedly, he drenched the victim with brandy before torching him. The resulting blaze killed several club members

In addition to the spectral cat, there was also some poltergeist activity: doors opening by themselves and weird sounds. Finally, Margaret asked a priest to perform an exorcism.

The activity settled down, but, in October 1969, a group of actors decided to hold a séance, as a lark, and the disturbances began again.

The following year, a dwarf’s skeleton, accompanied by a brass figurine of a demon, was found under the kitchen floor. Margaret called the priest to perform a second exorcism and the remains were given an appropriate burial. The hauntings stopped.

The arts center is a memory, having been replaced by a highly recommended fine dine Dublin restaurant, the Killakee Country House.

Displayed on one of its walls is Tom McAssey’s eerie portrait of Killakee’s spectral black cat with the fiery eyes.

The Home Of Ghosts: Penitentiary Chapel