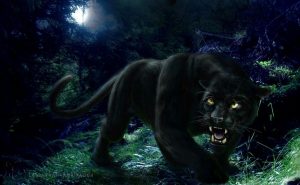 Something stalked the countryside as evidenced by slain livestock, paw prints, sightings and droppings which pointed to the presence of a panther in Allen County.

Cryptozoologists call these cryptids seen outside their natural habitat or thought to be extinct Phantom Panthers or ABCs, Alien Big Cats. “Alien” has nothing to do with UFOs or ETs. Photographs of ABCs exist. No phantom cat has been captured or killed.

In March 1997, something attacked Elmer Nesbaum’s penned sheep. When he went to the pen, built on a concrete slab, he saw few animals, colored red, were standing.

The rest were lying down, bathed in blood. Nesbaum called the vet who did what he could to save those who might survive. The killer clawed and bit the sheep with fangs, but did not eat them.

The farmer reinforced the pen. Heavy gates guarded the entrance. Chain link fencing covered by chicken wire was put on top. Six traps were placed the front. The killer set off the traps and clawed the gates apart.

William Reeder, dog warden and humane society director, investigated. In April, Reeder investigated the next incident. Sherwood Burkholder found forty of his sheep dead, killed by an unknown animal. The next day, he lost seventeen.

Casts were taken from the paw prints. They were feline. Unlike bears’ and canines’, cats’ claws are retractable.

As the slaughter increased, credible people began reporting sightings. The first were in April. Maria Henderson saw what she thought was a dog, then realized it was a large black and grey cat. Bob Cross observed a large black cat for ten minutes.

May: A deputy saw glimmering cat’s eyes in the beam of his spotlight, corroborated by tracks. Lou Abial went to his barn. As he walked back to his house, he saw feline tracks that weren’t there before. Apparently, the cat leapt from the hayloft and walked away.

Barbara Price saw a large black and grey cat that left tracks. Fang marks were found on a German shepherd’s neck. The sheep killings continued and expanded to peacocks, domestic ducks and the dog. Two more people saw the large dark cat. A veterinarian examined the animal’s droppings and found they were characteristic of cat scat.

Reeder and a deputy joined two Lafayette police officers who had the cat in sight. They held it in the spotlight beams, circling toward it. The cat began to walk toward them, docilely but, when it was within range of tranquilizer guns, sped into the woods leaving the familiar tracks.

Do ABCs in the Form of Black Panther Exist?

Theories about Phantom Panthers include:

Case of mistaken identity – There were too many witnesses who saw and described a large cat. The tracks and droppings were clearly feline.

Animals escaped from zoos, circuses or homes or pets set free – No large cat was reported missing in the area during the time. Many big cat owners won’t report escapes or freeing them because laws in some jurisdictions ban unlicensed people from owning exotics. There have been too many sightings to account for these.

Another animal or packs of wild dogs were the killers – These animals’ killing methods and eating habits differ.

ETs or their pets left behind – There is no scientific proof that ETs exist.

It is easier to believe that there was a black panther that stalked the Ohio countryside. Either they are native to the area, former captive cats or their descendents. They are undetected because they avoid humans and live in remote areas where humans rarely, if ever, intrude.