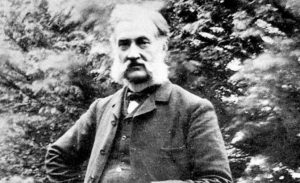 The strange disappearance of Louis Le Prince over 125 years ago, remains a mystery to this very day, although a photograph of a drowning victim from 1890 resembling Le Prince was discovered in 2003 during research in the Paris police archives which may throw more light as to his eventual fate.

It may be a surprise to many that it was in fact Le Prince, not Thomas Edison that shot the first moving images on film.

In October of 1888, Le Prince filmed the first motion picture which would become known as the Roundhay Garden Scene, and later used it to shoot trams and the horse-drawn and pedestrians crossing Leeds Bridge, using a single-lens camera he had developed and George Eastman’s paper film.

However, he was never able to perform a planned public demonstration in the US because he mysteriously vanished from a train from Dijon to Paris on 16 September 1890. His body and luggage were never found, despite his luggage being in a different compartment.

In 1898 Adolphe appeared as a witness for the defence in a court case brought by Edison against the American Mutoscope Company. (The suit claimed that Edison was the first and sole inventor of cinematography, and thus entitled to royalties for the use of the process).

Adolphe Le Prince was not allowed to present his father’s two cameras as evidence (and so establish Le Prince’s prior claim as inventor) and eventually the court ruled in favour of Edison. However, a year later that ruling was overturned.

Over the years, there have been many theories to explain Le Prince’s disappearance.

Many years later, his grand-nephew was one of those to claim Le Prince killed himself because of financial difficulties caused by many years of investing heavily in his inventions, that had left him close to bankruptcy.

However, having just invented the moving picture, and all the financial benefits that would have come from it, this would appear most unlikely, especially as Le Prince was known to be a loving husband and father that would not have abandoned his family in such a way as to leave his fate unknown.

Plus, its most unlikely anyone contemplating suicide would take their luggage from another compartment and take it with them when jumping off a moving train… especially as neither were ever seen again.

Another theory that was popular at the time was that Le Prince was murdered for his share of an inheritance by his own brother, who was the last person known to see the inventor alive. This speculation is also generally disregarded due to a complete lack of evidence.

The other main theory was that Le Prince was killed over his invention of the moving picture, and possibly at the instigation of his greatest rival, Thomas Edison, a wealthy man who was as powerful as he was unscrupulous.

Certainly, the timing of Le Prince’s sudden disappearance is suspicious. If he had succeeded with his plans for displaying his films in public, it would have been an obvious blow to any rivals in that field. Months after Le Prince vanished, Edison patented his own film equipment, with instruments that bore a decided resemblance to his missing competitor’s work, and he thereupon insisted that he, and no one else, deserved credit for inventing the motion-picture camera.

There is another connection between Edison and Le Prince that, in light of the latter’s disappearance, has a sinister aspect, the law partners of Clarence Seward and William Guthrie were prominent patent attorneys.

They had been friends of Le Prince, and were among the very few people who knew all the details of his experiments with motion pictures. By the time Le Prince vanished, their firm was working for Thomas Edison. There is also evidence that even before Le Prince’s sudden disappearance, there was a widespread legal conspiracy to deny him credit for his invention.

A further complication for the family of Le Prince was the fact that they were unable to take legal action defending the patent of Le Prince’s cameras against those of his rivals until he was officially declared dead, which under American law took seven years.

During all that time, Le Prince’s relatives were forced to sit on the sidelines while Edison and others gained credit for inventions they knew he had pioneered. In that sense, Le Prince’s disappearance was far more beneficial to his rivals than his immediate, unquestioned death would have been.

Certainly Le Prince’s family, particularly his wife, believed he had been deliberately killed, and that Edison was probably responsible. Shortly after the Edison court case verdict was announced, Le Prince’s son Adolphe was found shot dead while out duck hunting.

Again theories mentioned suicide or an accident as possibilities, although Lizzie Le Prince believed that Adolphe was murdered because he had too much knowledge about his father’s work for the likes of certain powerful men.

Edison himself wasnt unfamiliar with controversy and had a reputation for the way he conducted himself in business, most famously, his ugly propaganda war against Nikola Tesla and alternating currents, and rumours persist to this day that he had a hand in both the deaths of Le Prince and his son.

Where Are Memories Stored In The Brain?

The Sandman: Mysteries of Dreams and Nightmares