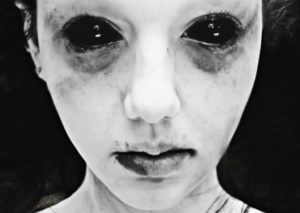 It was a night like any other night. I was browsing Reddit, munching on some snacks, and catching up on The Office. I live with my parents, but they had been asleep for nearly 2 or 3 hours.

I have the whole second floor to myself along with 5 bedrooms including mine. My door was wide open and I had a pretty good view of the hallway that leads to my stairs.

So, as I said, I was just chillin’ and relaxin’ when all of a sudden the motion-sensitive nightlight goes off in the hallway. No big deal, it happens quite often so I didn’t give it too much thought.

I go back to my shenanigans, but a little while later it happens again and this time I swear I see a shadow pass quickly into the room next to mine. I chuckled nervously and thought about how absurd I was being, but still…something felt off to me.

I finished the episode I was watching and decided to take a shower and then sleep. I took a quick shot of Nyquil because I was already a little nervous and I wanted to fall asleep quickly after my warm shower.

I have one of those showers with an almost transparent sliding door. If someone were standing right outside of it, they’d appear blurry. Anyways, I’m about 6 ft and the top of my weirdly shaped head just BARELY reaches over the top of the sliding doors.

As I’m showering I begin to hear noises, as I’m sure most people do when they’re showering. I brush it off assuming it’s just the water heater making a rumble, but just in case, I decided to hold off on the shampoo part until I gain a little confidence back in my own sanity.

That’s when things began to get really weird. I could’ve sworn I heard footsteps in my room. Mind you, I left the door open that connects my restroom to my bedroom.

The lights in my room flicker and so I decide I need to wrap it up and get out of my naked state immediately. I felt the drowsiness from the Nyquil setting in so my eyelids are already becoming heavy.

I apply the shampoo, close my eyes…and when I open them I look out the sliding glass door and see nothing but a thin, tall, black figure standing right outside of my shower.

Instinctively, I pull back a tad and snap my head upwards. A face. A face so horrendous I let out a scream, which apparently delights the face because it’s thin mouth turns into a malicious smile. It’s eyes piercing my mind.

Pain shoots through my entire body and I slip and fall, hitting my head against the back of my tub. I’m slowly blacking out, but the face is still staring at me. It’s pale, porcelain skin highlight the blackness of its eyes.

I’m not sure, but I think I screamed as loud as I could because the next thing I remember my mother is sitting over me and my father is on the phone. I’m back on my bed and when I try to speak my mom tells me to stay quiet and stay awake. I look back to my restroom in fear, but relief that whatever I saw was gone.

I’m not sure if it was the Nyquil playing tricks on me, but I swear, the face I saw froze my blood. The height of its body alone sent my mind into a frenzy. It’s face…so white, but eyes so black.

It took me a while to shower upstairs, but I eventually did. The shampoo burning my eyes is a welcome alternative to what may come back for me if I close my eyes again while I shower.