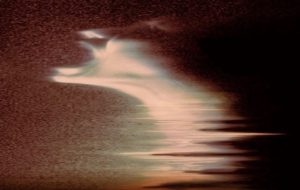 “Electronic Voice Phenomenon” (EVP) is believed to be the disembodied voices of the deceased that once walked this earth, along with other spiritual entities captured on audio by means of static or “White Noise” coming through various devices such as radio, television, tape, digital and video recordings.

This is one subject that is hotly debated among the skeptics and paranormal experts.

Hollywood dishes up its own flavor of EVP

In 2005 the movie chiller, “White Noise,” was released, giving audiences around the world a closer look at the phenomenon known as EVP. The movie stars Michael Keaton as Jonathon Rivers.

Rivers is a successful architect, whose wife Anna, a best-selling author, dies unexpectedly in a car accident. Next Rivers is approached by the ever-persistent and odd character Raymond Price (Ian McNeice), who convinces a dubious Rivers that his wife Anna has contacted him via EVP.

An astonished Jonathan becomes obsessed with the ghost world after hearing his wife’s voice come through Price’s EVP equipment.

Next, Jonathan sets up his own hi-tech little shop of ghostly horrors in his apartment with the intention of staying in touch with his deceased wife.

But bad turns to worst as Jonathan discovers that other ghosts are vying for his attention too, including some very dark and sinister entities who mean to harm Rivers.

In the end Jonathan chews off more than he can swallow and learns only too late that you should never mess around with EVP.

Skeptics attribute EVP phenomenon to charlatan trickery. A popular concept is that the voices are nothing more than “Apophenia.” The relation between unrelated phenomena. The theory is that “Auditory Pareidolia” is responsible for the phenomenon.

Auditory Pareidolia means that the listener is interpreting random sounds on recordings to be voices. Interferences such as radio, television, and other surrounding sounds are also thought to be grossly misinterpreted as ghostly voices from beyond.

Paranormal researchers would beg to differ and believe they have proof. These incorporeal voices captured time and again only give the researcher more validity of the existence of spirits around us.

Often the voices on a recording will answer questions asked of it. Often recognizable voices of loved ones have been captured on these recordings, only strengthening the belief that we are not alone in this world and that when we pass from this life to the next, our essence or spirit, can and often do reconnect with the living.

Sometimes the messages captured are hard to hear and decipher, while other times they are loud, clear and quite discernible. Most of the voices come through in what is known as “White Noise” or static. It is thought that through this static they are able to use this energy to manipulate it, thereby communicating with us.

Some researchers also ruminate other possible explanations of EVP as well. Common suppositions include psychokinesis: the human mind causing this phenomenon, natural energies, and extraterrestrials from beyond our galaxy.

With technology moving ahead, we have better recording apparatuses and are better able to capture these voices. The portable digital voice recorder is one such device that is widely used among paranormal researchers.

But because the digital recorders are so sensitive it is believed to also capture other interference as well. Many researchers have captured EVP recordings in places where alleged hauntings or paranormal activity is suspected to take place.

But EVP recordings go beyond places of paranormal interests, they are captured in other settings as well.

Since the early 1800’s and 1900’s, “Spiritualism” took hold of a vast population around the world. It was highly regarded by many to be the pivotal ingredient in regards to reaching the spirit world.

The Fox Sisters were thought to start the Spiritualism movement in 1848. This growing movement was practiced and sought after by many who were anxious and hopeful, seeking answers through the means of mediums, photography, table tipping, Ouija boards, crystal balls and other vises.

As this religious movement spread among the masses, the belief of spirit contact became so popular that even Thomas Edison had an interest in it as well.

Edison invented his own ghost catching machine to trap and communicate with the spirit world.

Edison felt that a sensitive device would allow us a glimpse into the world beyond by means of capturing the human essence on this devise. In 1920, Edison was said to experiment with this machine in his laboratory with other spiritists and scientists present. 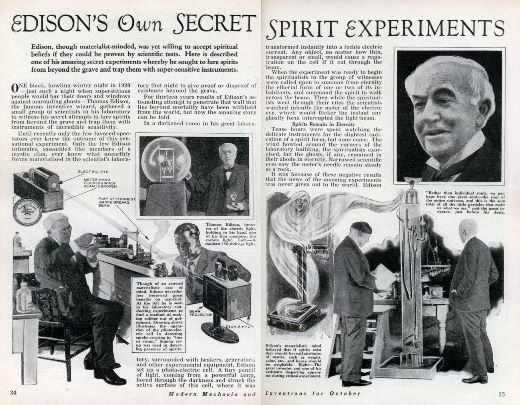 The experiment was said to produced no results. But his ideas were ingenious. He was well ahead of his time and on to something. As Spiritualism declined in the later part of the 20th century, better recording devises came along.

Attempts to use these recorders continued to pique the interest of researchers who sought proof of the spiritual world and would eventually manage to capture it.

In 1956, gifted American photographer and medium Attila von Szalay believed he had captured both photographic and audio recordings of ghosts. He was said to be among the first to investigate spirit voices on recordings.

He used a reel-to-reel tape recorder to achieve success. He found unusual sounds and voices on playback that could not be attributed to anything around him. He understood the voices to be those of discarnate spirits. Von Szalay cataloged these voices and in 1979 wrote a book called, “Phone Calls From The Dead.”

In 1957 Friedrich Jurgenson, a Swedish artist, singer and producer, was recording his own voice and began noticing strange phenomena on the recordings that he could not explain. He believed he was receiving telepathic messages from beyond.

Then on June 12, 1959, Friedrich went to his country house with his wife Monica. He brought his recorder to capture the sounds of wild birds.

When Listening Back Here Is What Friedrich Heard:

“I heard a noise, vibrating like a storm, where you could only remotely hear the chirping of the birds. My first thought was that maybe some of the tubes had been damaged. In spite of this I switched on the machine again and let the tape roll. Again I heard this peculiar noise and the distant chirping. Then I heard a trumpet solo, a kind of a signal for attention.

Stunned, I continued to listen when suddenly a man’s voice began to speak in Norwegian. Even though the voice was quite low I could clearly hear and understand the words. The man spoke about ‘nightly bird voices’ and I perceived a row of piping, splashing and rattling sounds.

Suddenly the choir of birds and the vibrating noise stopped. In the next moment the chirping of a chaffinch was heard and you could hear the tits singing at a distance – the machine worked perfectly!”

“I was outside with a tape recorder, recording bird songs. When I listen through the tape, a voice was heard to say “Friedel, can you hear me. It’s mammy ….” It was my dead mothers voice. ‘Friedel’ was her special nickname for me.”

After this, Friedrich continued working with audio recordings. In 1964 he wrote a book called “Voices From Space.” Jurgenson felt that he had reached both space and the world of the deceased through his many years of investigating.

Another famous researcher was parapsychologist, Konstantin Raudive, he was interested in life after death and captured over 100,000 EVP audio recordings during his years of research. He was so impressed with Jurgenson’s work that they met in 1965 and eventually worked on some EVP recordings together.

Contributions of Attila von Szalay, Frederick Jurgenson, and Konstantin Raudive, in their early study of spiritual voices (EVP) phenomenon, help to set the path for future generations in the scientific and paranormal world.

There are many unmentioned others who have also contributed to this widely regarded study and continue to do so today. And with the use of better technology, communication between both worlds is now easier to capture than ever. Many recordings worldwide can be found on the Internet and various sources.

Is there proof that spirit entities can and do communicate with us through EVP? Who can say for certain.

But in a world where many unanswered questions abound surrounding the unexplained, it seems natural to assume that where there is a channel or way to intersect us, the spiritual can and will continue to find a way to come through.